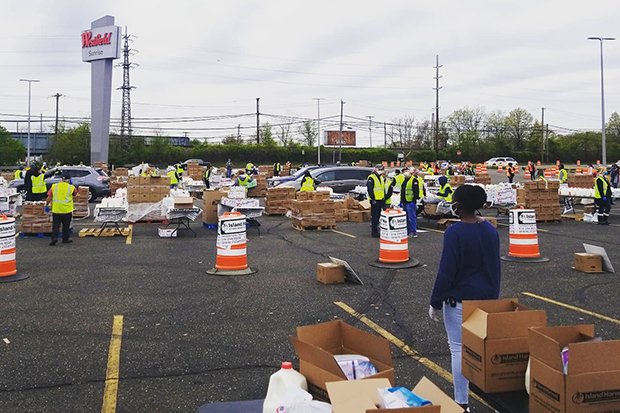 On Friday, May 9, Island Harvest Food Bank kicked off the Nourish New York Initiative - a program to feed thousands of hungry New Yorkers across the state - with a drive-through food distribution event at the Westfield Sunrise Mall in Massapequa.

According to a statement released by New York State Agricultural Department, the initiative, launched by Governor Andrew Cuomo, will provide $25 million to food banks for the purchase of surplus agricultural products from New York State farms to distribute to populations who need them most.

“As a result of the COVID-19 pandemic, New York food banks have seen a dramatic increase in demand, in some regions up to 200 percent, as many New Yorkers struggle to put food on the table,” the statement said. “At the same time, New York’s farmers and producers have been faced with their own unprecedented extreme financial difficulties. Many have lost up to 50 percent of their markets through the closure of schools and restaurants, leaving them without a place to sell their perishable products.”

Through the initiative, New York State is purchasing food and products from more than 2,100 New York farms and providing support to nearly 50 food banks, soup kitchens, and food pantries. The plan is for more than 20,000 households across the state to receive Nourish New York products over the next week.

Nourish New York is working to reroute New York’s surplus agricultural products to the populations who need them most through New York’s network of food banks. The State is also asking any philanthropies that would like to help the State's food banks to contact Fran Barrett, Director of Non-Profits at COVIDPhilanthropies@exec.ny.gov.