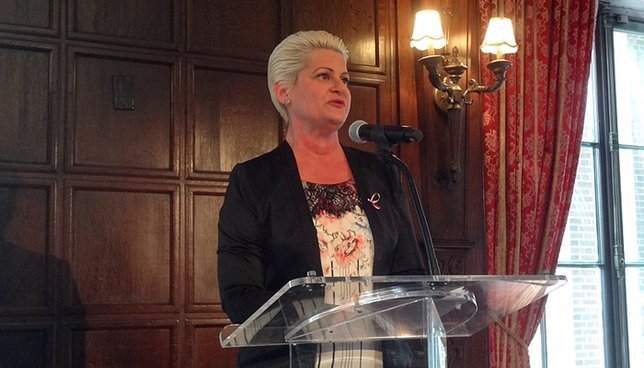 Long Island, NY - February 27, 2018 - Long Islanders will get a firsthand account of what it's like to cover the White House today when Maggie Haberman, The New York Times' star White House correspondent, chats with Fair Media Council CEO and Executive Director Jaci Clement at the Folio Awards Luncheon, happening March 21, 11 a.m. to 2 p.m. at The Garden City Hotel. The program will be dedicated in memory of Long Island journalist John Kominicki. Award presenters include PIX11 anchors Tamsen Fadal and Dan Mannarino.
Haberman's ability to break stories has led some people call her the "Trump Whisperer." Others refer to her as "the best reporter in the room."
"We'll talk about covering the White House today, stories Maggie has broken, what's real news and what's fake, and lots more," said Clement, noting what's in the news on the day of the luncheon will help drive the conversation. "This is an exclusive opportunity for Long Islanders to get an inside look at what's happening behind the headlines of the most important stories of our time."
The Folio Awards, which honor the best in news and social media as chosen by the public, is Long Island's largest media event, and its relevance continues to grow as media continues to change.
Creating media savvy news consumers is vital to understanding the world today, and is crucial for children being exposed to news that's fake, misleading and harmful. Addressing these needs is the focus of FMC's work.
With 30 well-known business and community leaders serving as Folio judges, this year's winning stories illustrate Long Island's want of news that is in-depth and impactful, from an exclusive inside look at what happens inside the Nassau County Police Academy -- a story for which PIX11's Keith Lopez spent seven months embedded at the NCPD -- or how a major Long Island roadway was missing required wrong way signs, as NBC New York discovered.
Attending the Folio Awards not only supports the work of the Fair Media Council, but gives people the ability to meet the media, see some of the year's biggest stories to impact Long Island and learn more about the news process. Tickets and tables are on sale now.
The Folio Awards are sponsored by Bethpage Federal Credit Union, Northwell Health, Mazars USA, Protiviti, NBC New York, PIX11, South Nassau Communities Hospital, Hofstra University, WCBS/WLNY, AERTC's Robert Catell and Ultimate Class Limousine.
"Judging the news is something people do everyday. What news you let into your life is a choice, and that choice determines how much you know about the world around you, and what you think," noted Clement.
ABOUT FOLIO AWARDS
The awards luncheon is Wednesday, March 21, with a VIP reception and Winners' reception both beginning at 11 a.m., followed by program and luncheon.
ABOUT FAIR MEDIA COUNCIL
FMC is a 501c3 nonprofit organization, advocating for quality news and working to create a media savvy society. More: fairmediacouncil.org.