By Christian Abbatecola Published: May 04 2014 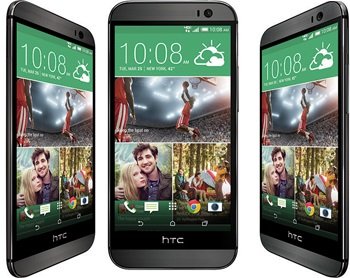 The New One (M8) launched just over a month ago and, while it may have found a great deal of fanfare and positive reviews HTC is evidently not content to rest on its laurels as a special edition of the One will be hitting Sprint stores this Friday.

Tech enthusiasts and smartphone lovers are likely familiar with the practice of exclusive iterations of particular phones by now, but this device provides more than just a shiny new paintjob (though that’s present as well, adding a black/gold option to the existing trio of One colors). Partnering with audio experts Harman/Kardon, HTC has forged a new One clearly aimed at winning the hearts and ears of music lovers.

The HTC One Harman/Kardon edition brings to the table a series of audio enhancements designed to add a bit more character to the phone’s already industry-leading built-in speakers and make up for the many shortcomings of digital music with some major augmentations. Chief among those new tweaks is the inclusion of Harman’s Clari-Fi software.

A fairly new product, Clari-Fi is an audio enhancer that tries to undo some of the damage done by the compression process used to squeeze large audio files down to a smaller size, which is generally done to allow for a greater quantity of files to be stored on a small allotment of memory or for audio streaming services to be less resource intensive and more liable to work without interruption. The compression process, however, also removes many of the finer details of the audio file, resulting in a muddled end product far removed from the actual sounds and notes played in the original recording.

Clari-Fi scans audio files as they are being played, identifies impurities and artifacts caused by compression, and corrects for deficiencies in audio quality. According to Harman/Kardon, this allows the program to recaptures the missing highs and lows, restore vocals to their natural tone, and return music to a “true stereo sound.” It works with a wide variety of audio formats and will perform in accordance with the limitations of each one—making many corrections for satellite radio, streaming, and MP3 files, and still touching up FLAC or CD-quality recordings.

Coupled with 32 GB of onboard storage and the option for another 128 GB with the help of a microSD card, the Harman/Kardon One could be an audiophile’s dream phone.

In addition to Clari-Fi, the special edition One will also include LiveStage, an audio program that adds depth to music playback on headphones to mimic the soundscape of a live performance. The phone’s front-facing stereo speakers, which are already a cut above those on most other smartphones, have been “tuned” by Harman engineers to improve their sound quality as well, and a pair of Harman AE earphones will come in the box so owners can take advantage of all the software enhancements.

Unfortunately, those hoping to get their hands on the HTC One Harman/Kardon edition when it launches on Friday, May 9 will have very limited carrier options. The phone will be a Sprint-exclusive, sold for $230 on-contract, with no plans having yet been announced to bring it to Verizon or any GSM carriers.