A sturdy build, pleasing aesthetic, and impressive performance make the One a tempting choice for smartphone buyers. 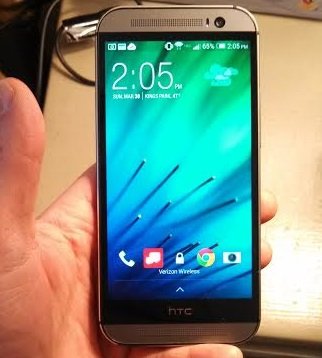 Last year HTC turned a lot of heads when it released the first iteration in its new line of high-end smartphones, the One (M7), by bringing to market an Android device that looked as premium on the outside as it operated on the inside. The curved metal body was both comfortable to hold and much more appealing to look at then the standard plastic and polycarbonate fare of its competitors and predecessors.

This year HTC furthered that aesthetic by giving the all new HTC One (M8) a brushed metal finish and curving the back-cover all the way around to the screen, eschewing the M7’s plastic siding and giving the phone an even more polished look. The only noteable plastic left on the phone is an infrared sensor at the very top, which it uses to act as seamless universal remote for TVs and home theaters.

Its slightly improved physical build is indicative of the phone’s overall quality—HTC has found a striking, unique design which it is confident in and did not look to reinvent the wheel this year, but has made minor upgrades at almost every turn.

Battery life has certainly stepped up with the addition of a larger battery and some energy-saving options (through four days of moderate use, I found the phone only needed to be charged twice), and the device is a little bit snappier than last year’s iteration. Jumping from 2013’s 1.7 GHz quad-core processor to 2.3GHz no doubt bolstered the new One’s performance, and HTC seems to have cut down on a bit of the bloatware which can often prove a hindrance to users.

To that end, many users will be relieved to know that the latest version of HTC Sense (the company’s user interface) has moved its BlinkFeed social media aggregator off of the main home screen. BlinkFeed provides a single stream of any Facebook, Twitter, Instagram, or other social media accounts a user syncs it with (as well as news sources and sports scores) in a single easily viewable screen; it’s a great way to save time in theory, but was originally the default screen for the One (M7) and made accessing other apps more time consuming than it ought to be. Now BlinkFeed is a swipe away from the main screen, making it easily accessible without being intrusive.

The cameras have also received a bit of an upgrade. While HTC is still using the 4 MP “UltraPixel” rear shooter, the company has employed a secondary lens to help the camera perceive depth and tweak focal points after an image has been snapped. This might not provide quite the same clarity as phones with higher pixel counts, but in my brief time with them the lenses have performed well and seem to excel in low-light situations (unfortunately, a rainy weekend on Long Island has not afforded me much opportunity to test it out in broad daylight). The One (M8)’s front-facing camera has also been given a substantial upgrade to 5 megapixels, which will make those fond of video chatting or taking “selfies” with a much better option than provided by other smartphones.

The One continues with its tradition of comparatively high quality built-in speakers, providing actual stereo through two large grills on both ends of the screen. Though the Beats branding has been replaced by Boomsound, the speakers are still louder and clearer than any other smartphone on the market, putting the One a class above all others for those who like to play videos, stream music, or use their speakerphone.

HTC has added a couple of other distinguishing features in the form of intuitive motion controls. Tapping the screen twice will wake it up from sleep mode, raising it to your ear when there is an incoming call will answer the phone without have to press or swipe in any direction, and flipping it on its face will silence the ringer when you don’t want to take that call. You can also skip straight to the camera app by picking the device up horizontally and pressing the volume button, allowing you to snap a quick picture of an interesting subject before it’s too late. All four of these gestures have proven responsive in my time with the phone, though I did find myself accidentally turning screen on while holding it a few times.

Perhaps the only area in which the One has regressed is internal storage—now offering 16 and 32 GB of memory instead of 32 and 64 GB—but HTC has more than made up for that slight by adding a microSD card slot which the M7 sorely lacked. Now that SanDisk is making a 128 GB microSD, this allows for a rather substantial increase in potential storage capacity.

With Samsung’s Galaxy S5 due out in early April prospective buyers might face a tough choice in trying to pick their next smartphone, but HTC makes a compelling case the One with a premium build quality and intuitive gesture controls.

The One is presently available in-store through Verizon Wireless, and will be making it to other carrier stores in April.

Below: Pictures taken of and by the new HTC One (M8)