The Long Island Music Hall of Fame will be co-sponsoring a screening of Bang! The Bert Berns Story at the Port Jefferson Documentary Series on Monday at 7 P.M. at Theatre Three. 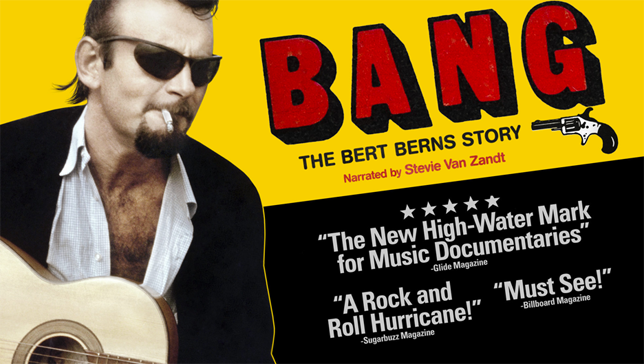 Port Jefferson, NY - April 21, 2017 - The Port Jefferson Documentary Series and the Long Island Music Hall of Fame will be presenting a screening of the hit documentary Bang! The Bert Berns Story. Tom Needham, the host of WUSB’s the Sounds of Film and Vice Chairman of the Long Island Music Hall of Fame, will be conducting a Q and A after the screening with the Brett Berns, the son of the legendary songwriter and record producer of countless hits including “Twist and Shout,” “Hang on Sloopy,” “Piece of My Heart,” and “Brown Eyed Girl."
The award-winning documentary contains many heartfelt interviews by artists including Paul McCartney, Van Morrison, and Keith Richards. Berns’ sessions made legends of Solomon Burke, The Isley Brothers, The Drifters, Ben E. King, Wilson Pickett, Van Morrison, and Neil Diamond, and his songs became chart-topping covers for the likes of the Beatles, the Rolling Stones, the Animals and Janis Joplin. His premature death at 38 cut short a seven-year streak of hits, rooted in his early Brill Building and 1650 Broadway days, through his tenure at Atlantic Records to the formation and success of his own labels Bang Records and Shout Records. The film is narrated by Long Island Music Hall of Fame inductee,Steven Van Zandt. More  information about the Port Jefferson Documentary Series' screening of Bang! The Bert Berns Story can be found at www.portjeffdocumentaryseries.com.
The Long Island Music Hall of Fame (LIMHOF) is a 501(c)(3) non-profit organization dedicated to the idea that Long Island’s musical heritage is an important resource to be celebrated and preserved for future generations. The LIMHOF was created as a place to inspire in each person the desire to explore and celebrate music in all its forms and to be a place where the music community will find the support, resources and leadership necessary to aim them in that exploration. For more information about the Long Island Music Hall of Fame, visit www.limusichalloffame.org.