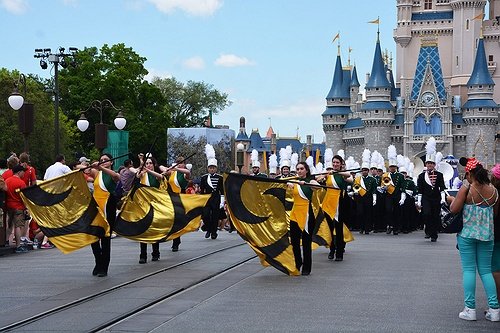 The choral group and the concert band both put on stunning shows that entertained guests. The marching band entertained hundreds of Magic Kingdom Park guests as they marched through Frontierland and around Cinderella Castle and onto Main Street, U.S.A before the “Festival of Fantasy Parade”.

This was the group’s third visit to the resort with the Disney Performing Arts Program.

In addition to their performance, the choral groups participated in the Disney Performing Arts “Disney Sings” workshop, where they experienced the exhilaration of being a professional performer as they prepared music for a simulated Disney show under the tutelage of a seasoned Disney vocalist.

The marching band also participated in a Disney Performing Arts workshop. In “You’re Instrumental”, they learned how to get the most of their rehearsals and honed their sight-reading skills under the guidance of an experienced Disney Teaching Artist Vocal, instrumental and dance ensembles from all around the world apply to perform each year as a part of Disney Performing Arts at both the Disneyland Resort and the Walt Disney World Resort. Once selected, they are given the opportunity to perform at the resort for an international audience of theme park guests. Millions of performers have graced the stages of the Disney Parks in the more than 25-year history of the program.

About the Disney Performing Arts Program

Disney Performing Arts unlocks student potential and helps young people make their own dreams come true – whether it’s performing in front of an international audience of thousands at Disney theme parks and resorts or honing their craft in enriching workshops and clinics taught by entertainment professionals.  Every year, thousands of vocal, instrumental, and other ensembles travel from around the world to participate in Disney Performing Arts programs at the Disneyland Resort in Southern California and the Walt Disney World Resort in Florida. Disney delivers workshops and performance opportunities that enrich, inspire and often lead to life-changing personal achievement.