A report by the Department of Education finds that resegregation trends are on the rise nationwide.

New York is among the states that consistently tops the list for the most segregated schools for both latino and black students, according to a report by the U.S. Department of Education.  The report also finds that double segregation, based on race and poverty, continues to expand throughout the nation.  While immigration trends over the past half century have altered the population make-up in states like New York, California and Texas especially, a typical Latino student attends school with less than 25 percent white classmates.  On average, black students nationwide attend schools where almost two-thirds of their classmates come from low-income families. 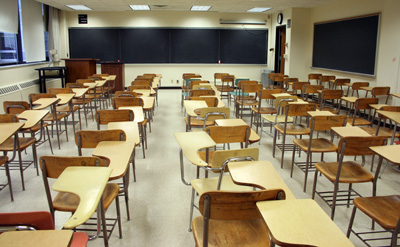 Resegregation is an issue investigated in the report.  Although achievement gaps were significantly narrowed between the 1960’s and 1980’s, when strong action was taken on a federal level to integrate schools, the trend began to reverse after a 1991 Supreme Court decision made resegregation easier for school districts to abandon integration plans.  The report finds that the Obama Administration, which has been pushing its support for the expansion of charter schools, which is the most segregated sector of education for black students in the nation, has done little to alleviate the problem of resegregation.
The report, titled “E Pluribus...Separation: Deepening Double Segregation for More Students” makes no question as to whether or not the segregation of latino, black and white students poses a problem in terms of achievement.  “Schools of concentrated poverty and segregated minority schools are strongly related to an array of factors that limit educational opportunities and outcomes. These include less experienced and less qualified teachers, high levels of teacher turnover, less successful peer groups and inadequate facilities and learning materials,” the report states, also citing evidence that desegregated schools lead to prejudice reduction, more complex thinking and increased civic engagement among other benefits to learning outcomes.  Simultaneously, resources linked to predominantly white or wealthy schools offer  “serious educational advantages” over minority segregated schools.
The problem is exacerbated by the fact that since 1970, when 80 percent of students were white, the population of latino and black students has grown to just under 50 percent.  Latino enrollment has skyrocketed from five percent to over 20 percent nationwide, making latinos the largest minority population in the western states.  The average latino attends school where nearly two-thirds of their classmates are low-income, while the typical white or asian student are exposed to nearly half that rate of poverty among their classmates.
According to the report, these developing trends are a result of “indifference toward integration in U.S. schools since the 1970’s.”  Recommendations provided by the report include enforcement of Title VI, which protects people from discrimination based on race, color, or national origin in programs receiving federal assistance through the Justice Department and Office for Civil Rights.  On the state and regional level, regional magnet schools and inter-district programs such as sity-suburban transfers would foster diverse schools, with existing programs in Connecticut and Ohio serving as models.
Despite the alarming trends, the report concludes on a positive note: “Many things can be done, at all levels of government and in thousands of communities, to move towards a new vision of educational and social equity. There is much to learn about how to create lasting and successful diverse schools that can shape a successful multiracial society. The time to begin is now.”
Share your thoughts on this article by posting your comment below or visiting our Long Island Living discussion forum.