On a Tax Day conference call with reporters U.S. Senator Charles E. Schumer launched a new push for the Identity Theft and Tax Fraud Prevention Act of 2015 that will evolutionize the process for taxpayers ... 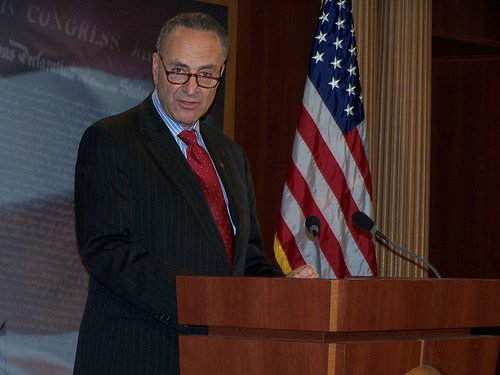 Albany, NY - April 15, 2015 - Today, on a Tax Day conference call with reporters U.S. Senator Charles E. Schumer launched a new push for the Identity Theft and Tax Fraud Prevention Act of 2015 that will revolutionize the process for taxpayers trying to resolve tax-refund fraud cases and recover their stolen tax refunds in a timely fashion. Schumer said tax-refund fraud, technically known as tax-related identity theft, occurs when someone uses a stolen Social Security number and other personal information to file a tax return and claim a fraudulent refund. This type of fraud has increased in recent years throughout New York State – and continues to increase – as tax fraudsters have become more aggressive, and filing with online preparers, who do little to verify their client’s identity, has become more popular.

Last year, over 70,000 New Yorkers were victims of tax-refund fraud, and Schumer said the number this year is likely to be even higher – making refund recovery and fraud protection even more important. Schumer explained that the current process for recovering losses is complicated and often frustrating for taxpayers—leaving some taxpayers waiting years before they receive their much needed tax refund. The average victim of tax fraud is left waiting over 300 days before their case is resolved and a check is sent in the mail. This new bill would require the Internal Revenue Service (IRS) to pay refunds to victims of tax-refund fraud within an average of 90 days after a taxpayer has reported the crime and require the IRS to provide a single point of contact to track a victims case from start to finish.

“The number of New Yorker falling victim to stolen tax refunds via identity theft is high and rising. What’s worse, due to bureaucratic backlogs, the average victim of tax fraud is left waiting over 300 days before their case is resolved – and that’s just unacceptable,” said Senator Schumer. “For far too long victims of tax-refund fraud have had to clear unnecessary and often frustrating bureaucratic hurdles at the IRS. It’s time we start better protecting New Yorkers and crack down on this increasingly common form of tax fraud.

“For middle- and low-income New Yorkers, the hundreds or thousands of dollars you are due in tax rebates can make a big difference. But all it takes is for a hacker to steal your social security number and some personal information in order to file a fake tax return on your behalf and claim your tax refund. That is why I have introduced legislation that would help combat tax-related identity theft and provide greater recourse to victims of this tax fraud. This bill is a comprehensive approach for combating tax-refund fraud and helping victims recover. This bill not only requires the IRS to resolve a victims case within 90 days, but it gives the victim an expert at the IRS to handle their case rather than getting passed around the agency with no end in sight,” said Schumer. “So I will also be pushing my colleagues in Congress to pass this legislation, as soon as possible.”

Schumer explained that tax-refund fraud is a serious crime, which 2.3 million Americans fell victim to just last year according to the IRS. In fact, according to the Federal Trade Commission (FTC), tax-refund fraud is now the most common form of identity theft reported. The Internal Revenue Service (IRS) recently published a report, outlining that a total of 71,011 New Yorkers were confirmed victims of tax-refund fraud in 2014. If evenly spread across New York, this would mean that 30,000 victims were from Upstate New York and the Hudson Valley. According to the IRS’s most recent estimate, $5.8 billion was stolen through fraudulent tax refunds during the 2013 filing season, and that is just the theft that was detected by the IRS. The Government Accountabilities Office has noted serious concerns with this IRS estimate.

Schumer said hackers and fraudsters typically only need pieces of a taxpayer's personal information, such as their Social Security Number (SSN), to submit a fake tax return and unlawfully claim a refund. Schumer said an identity thief who gains access to a SSN can easily make a quick buck by filing this fraudulent online tax return in hopes of claiming a rebate. Schumer said that tax-refund fraud is increasing as fraudsters become more aggressive in obtaining SSNs, and as the filing of taxes with online preparers increases. Schumer said it is the fact that these online tax preparers often do not effectively verify their client’s identity that often allows fraudsters to file fraudulent returns, and that this is frequently done early in the year to preempt the law-abiding person who may file later in the tax season. Schumer said this can create a nightmare for people across New York State, and particularly those who file late and find out weeks or even months after the fact that someone else has already filed and obtained their refund. That is why, in the midst of tax day, Schumer said there must be a better system in place to help taxpayers resolve these tax-refund fraud cases and recover their stolen tax refunds in a timely fashion. Schumer launched a push for the Identity Theft and Tax Fraud Prevention Act of 2015, which would give greater recourse to New Yorkers who have their refunds stolen.

First, the legislation would create a single point of contact for a fraud victim at the IRS. Schumer said that this would allow New Yorkers who have fallen victim to this kind of tax fraud to call one person within the agency who could provide holistic advice and follow their case from start to finish. Schumer said this option is preferable to the current system of having to call the IRS and speak to many different people who are not familiar with your situation. Schumer said the Taxpayer Advocate Service has been pursuing this idea for years and his legislation would finally allow this to happen.

Second, the bill would require the IRS to issue an individual’s stolen refund within an average of 90 days after a taxpayer has reported the crime, as opposed to the current average of 300 days. According to the Taxpayer Advocate, the amount of time needed to resolve a case can be cut in half if the IRS adopts appropriate administrative reforms.  Schumer said middle class families who are victims of tax-refund fraud —who often depend on receiving a tax refund each year—should not have to wait almost another full year to receive their refund. Schumer explained that the current process for recovering losses after tax-refund fraud is complicated and often frustrating for taxpayers—leaving some taxpayers waiting years before they receive their much needed tax rebate. A 2013 report from the IRS's Inspector General revealed the agency took an average of 312 days to resolve individual identity theft cases. Schumer said this delay was unacceptable, as thousands of New York middle class families depend on receiving their annual tax refund.

Schumer said that in addition to providing greater recourse for consumers, the legislation would help crack down on future fraud through a number of mechanisms, three of which he highlighted. First, the legislation would require that The Department of Treasury issue polices to ensure that paid tax preparers institute identity verification that isn’t just a client’s SSN. This could be accomplished by simply asking filers to provide a copy of their W-2 to verify their identity. Schumer said this expanded use of the W-2 would add an extra layer of protection for filers and make it harder for fraudsters to falsely file tax returns in someone else's name, as they would not have the W-2 form required to verify identity. Second, it would increase the penalties on tax-refund fraud. Schumer said the maximum penalties would be increased from 3 years imprisonment for tax-refund fraud and fines of up to $100,000 to 5 years imprisonment and fines of up to $250,000. The legislation would also increases maximum civil penalties for tax preparers who unlawfully share client’s information with third parties. Third, the bill would require that tax account numbers associated with pre-paid debit cards be distinguishable from a regular bank account. Fraudulent tax refunds are often paid out through pre-paid debit cards, which are nearly untraceable. This would give the IRS the ability to better survey potential fraud and catch more fraudsters using pre-paid credit cards.

During the call, Schumer provided data on the likely number of fraud victims in each region in New York. According to the IRs, there were a total of 71,011 tax-related identity theft victims in the State of New York in 2014. Across Upstate New York in particular, there were an estimated 30,113 victims of tax refund fraud in 2014.

The Identity Theft and Tax Fraud Prevention Act of 2015 was introduced by Senator Bill Nelson [D-FL] and has six co-sponsors, including Schumer and Senators Sherrod Brown [D-OH], Ben Cardin [D-MD], Dianne Feinstein [D-CA], Kirsten Gillibrand [D-NY], and Amy Klobuchar [D-MN]. Schumer said that he will be pushing his colleagues to pass it out of the Senate Finance Committee so it can proceed to full consideration by the Senate, and ultimately give much greater recourse to victims of tax-related identity theft in New York this year as well as help decrease tax fraud in future years.