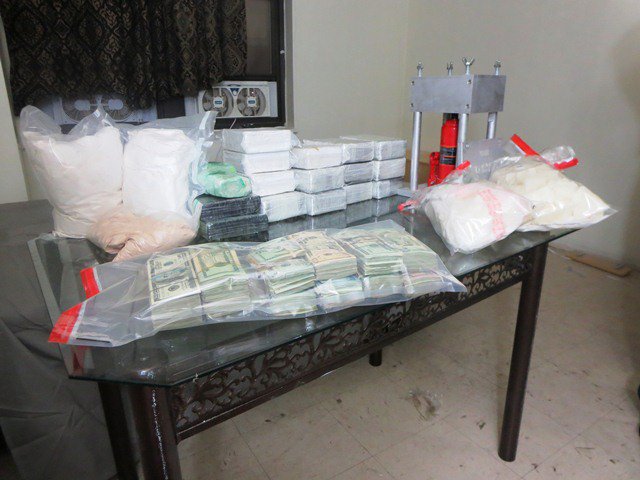 New York, NY - April 16, 2014 - James J. Hunt, Acting Special Agent in Charge of the U.S. Drug Enforcement Administration’s New York Division (DEA); Bridget G. Brennan, New York City’s Special Narcotics Prosecutor; New York City Police Commissioner William J. Bratton; Thomas C. Krumpter, Nassau County Police Acting Police Commissioner Thomas C. Krumpter; Kathleen Rice, Nassau County District Attorney; Vincent F. Demarco, Suffolk County Sheriff; Thomas J. Spota Suffolk County District Attorney; and Michael McGowan, Chief of Hempstead Police Department, announced the arrests of three members of a sophisticated drug trafficking operation based in an apartment building at 111 Wadsworth Avenue in the Washington Heights section of Manhattan. The location offered the traffickers easy access to out of state and Long Island transportation routes via the George Washington Bridge, Interstate 95 and the RFK Triborough Bridge.
As a result of a long-term investigation, investigators and agents from Special Narcotics and DEA’s Long Island Division Office Group D-14 seized approximately 20 kilograms of heroin (44 lbs.) and 17 lbs. of methamphetamine, or “crystal meth” during court authorized searches of two apartments at 111 Wadsworth Avenue.  Investigators believe the narcotics were intended for distribution in New York, Pennsylvania and Massachusetts, as well as other locations.
Pablo Paulino, Pedro Abreu and Janeison Garcia were arrested on Monday evening and are charged in a criminal complaint filed by the Special Narcotics Prosecutor’s Office. The arrests followed several days of surveillance outside 111 Wadsworth Avenue, Apt. 21E, where investigators and agents observed the three defendants repeatedly entering and leaving carrying bags. On Monday afternoon, investigators followed as Paulino and Garcia left the building and drove off in a taxi, and arrested the pair several blocks away.
At approximately 4:30 p.m., agents and investigators entered Apt. 21E pursuant to a search warrant and observed Abreu inside the apartment. A search of a safe inside a bedroom revealed approximately $120,000. Investigators and agents discovered a “trap” or hidden compartment behind the wall of the bathroom, accessible by removing a panel of four tiles. The trap contained approximately 17 lbs. of methamphetamine and shoe soles that had been ripped from several pairs of women’s footwear. International traffickers commonly use hollowed out shoes to conceal narcotics. Also seized from Apt. 21E were 100 grams of heroin from the pocket of a jacket inside a closet, numerous cellphones, drug ledgers and an electrical bill for Apt. 10E in the same building.
Based on evidence collected during the arrests, including two sets of keys found in the possession of Abreu and Garcia, agents and investigators obtained a court authorized search warrant for Apt. 10E. At approximately 9 p.m., agents and investigators entered the apartment and discovered it was equipped with a sophisticated counter surveillance system. Two pinhole cameras were concealed in the frame of the apartment’s front door.  The cameras recorded activity in the public hallway from end to end and fed the video to a monitor mounted above the door inside the apartment and to a DVR that recorded the feed.
In a search of Apt. 10E, agents and investigators found approximately 11 kilos of heroin (over 24 lbs.) in brick form hidden inside a trap in a kitchen cabinet. The trap was accessed through a sliding panel on the back wall of the cabinet, which was visible only after the shelves of the cabinet had been removed. Approximately 5 kilos of heroin (11 lbs.) were tucked between the mattress and box spring of bed in a bedroom. A TV stand with tower storage components in the living room contained another kilo of heroin (over 2 lbs.).
A wall in the bathroom of Apt. 10E featured a trap that could be accessed by removing the medicine cabinet. Agents and investigators recovered two large bags containing more than 2 kilograms of heroin (approximately 5 lbs.). Also seized from the apartment were packaging materials and kilo presses designed to compress narcotics into brick form.
DEA’s Group D-14 is comprised of agents and officers of the DEA, Suffolk County Sheriff's Office, Suffolk County District Attorney's Office, Hempstead Police Department, Nassau County District Attorney's Office and Nassau County Police Department. The NYPD’s Narcotics Borough Manhattan South assisted in the arrests.
The defendants were arraigned in Manhattan Criminal Court last night. Abreu and Paulino were held without bail. Bail for Garcia was set at $250,000.
The charges and allegations are merely accusations and the defendants are presumed innocent until proven guilty.
Pictures via the DEA.