Kellogg is said to have died from the 1918 flu epidemic. 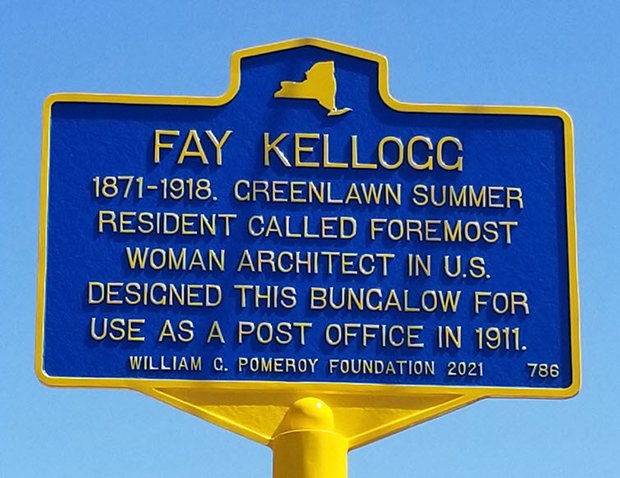 A marker now stands on a street in Huntoington to honor Fay Kellogg, a woman who broke glass ceilings for women professionally and socially as an architect and suffering in the early 20th century. Kellogg, who probably died in the 1918 flu epidemic, summered in Greenlawn. The marker stands at the site of a residence and former post office she designed at 22 Boulevard Avenue in Greenlawn and pays homage to her historical accomplishments.

Lupinacci described Kellogg as a “pioneer in the field of architecture.”

Officials from the Town of Huntington and the Greenlawn-Centerport Historical Association were on hand on April 6 to unveil the new sign.

It is thought that Kellogg died at 47-years-old in July 1918 from the so-called Spanish Flu.

“Fay was a trailblazer, ahead of her time, and should be remembered for her many accomplishments,” said Deanne Rathke, Director, Greenlawn-Centerport Historical Association. “One of her greatest loves was the summer home that she designed and built here in Greenlawn where she took great pride in putting on a pair of Khaki pants and farming the 15 acres herself."

Rathke quoted Kellogg as saying “I don’t approve of a well-equipped woman creeping along; let her leap ahead as men do. All she needs is courage.”

"As an advocate for women’s rights her words can still serve as an inspiration to women today,” she added.

The historical marker was funded by a grant, secured by the Greenlawn-Centerport Historical Association, from the William G. Pomeroy Foundation.

A press release on the Town of Huntington website outlined Kellogg’s biography:

Fay Kellogg (1871-1918), a summer resident of Greenlawn, was considered the leading woman architect of her day and an advocate of women’s rights, including the right to vote.

Kellogg was born in Pennsylvania and studied in Washington, D.C. and at Pratt Institute in Brooklyn. She continued her studies in Paris. Through her efforts the prestigious Ecole des Beaux Arts was opened to women, but only after she had completed her studies elsewhere.

She joined the practice of New York architect John R. Thomas, where she helped design the Hall of Records on Chambers Street in Manhattan. After Thomas’s death, she set up her own architectural practice in 1903. She designed numerous buildings in New York and also a skyscraper in San Francisco as well as “hostess houses” on military bases in South Carolina, North Carolina, and Tennessee during World War I. She was the lead architect for all building projects nationwide for the American News Company. She usually supervised the construction of her designs.

In 1907 and 1909, Kellogg purchased land in Greenlawn totaling 15 acres. She spent six months a year in Greenlawn, raising chickens and commuting into the city.

In 1911, Kellogg was commissioned to design a new home and post office for Greenlawn’s postmaster Elizabeth A. Hilton near the entrance to the new train station on Boulevard across from the firehouse. The bungalow provided living quarters for Hilton as well as space for the post office. Following Hilton’s death in 1919, the building was sold to her sister Sarah Hilton. The building continued to be used as the post office until as late as 1929. The building is now a residence.

Fay Kellogg died at the age of 47 in her Brooklyn home in July 1918, after falling ill in the spring of 1918, when the Spanish Flu was first identified in U.S. military camps; army personnel were among the first U.S. casualties of the pandemic. While her obituary states that she “had a breakdown” working on the construction of hostess houses at Camp Gordon in Atlanta, it has been speculated that Kellogg was a victim of the deadly flu of 1918.