At the center of attention was K9 Reis, a two-year-old dark brindle colored Dutch Shepherd from the Netherlands. 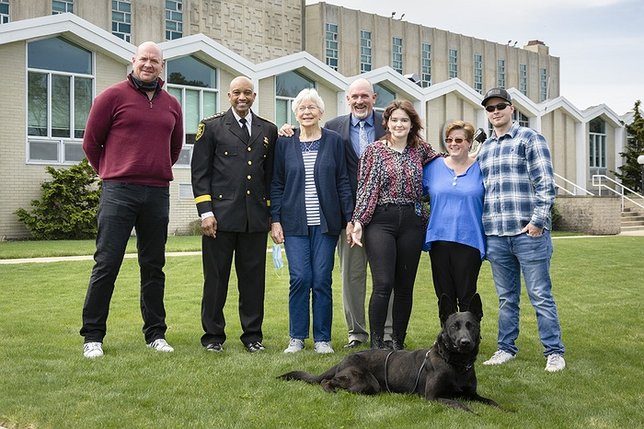 Stacey Reister and Family with Sheriff Toulon and Reis.

County Sheriff Errol D. Toulon Jr., along with Undersheriff Steven Kuehhas, Undersheriff Kevin Catalina, Deputy Sheriff PBA President John Becker, and Suffolk County Correction Officer Association President Lou Viscusi hosted two consecutive ceremonies recently to pay tribute to several fallen law enforcement officers in the most unique way.
At the center of attention was K9 Reis, a two-year-old dark brindle colored Dutch Shepherd from the Netherlands. He is a high-drive, strong-willed dog who exhibits a uniquely high level of courage. It’s not surprising that his handler named him Reis, a tribute to a beloved Sheriff’s Correction Officer, Andrew Reister, who was killed in 2008 while working an off-duty job.  This morning, the family of Andrew Reister gathered at the Sheriff’s Office to participate in a formal naming ceremony and watch Reis demonstrate some of his talents.
Suffolk County Correction Officer Association President Lou Viscusi said, “I had the pleasure of working alongside Andrew, both in the facility and on the COBA Board. He was not only a coworker but a friend who would do anything to help others. I thank Deputy Sheriff Korte for choosing to honor him this way.”
Later in the afternoon K9 Reis received a state-of-the-art Armor Express ballistic vest donated by the Simonsen Foundation in conjunction with Blue Lives Matter K9 and the Capital K9 Association.  Leanne Simonsen established the Simonsen Foundation in honor of her husband, deceased NYPD Detective Brian Simonsen, who was shot and killed February 2019 in the line of duty.  The vest was donated in memory of another fallen officer, NYPD Transit Detective George Caccavale, who was only 33 years old when he was shot and killed in 1976 while working an off-duty job.  His daughter, Carla Caccavale, and her children, were also present at the ceremony.
Leanne Simonsen said, “We started this foundation to ensure that my husband, Brian Simonsen, would never be forgotten. When Brian was killed my world went dark. Through this foundation, the people we have met, and the work we have done, the light has started to return with all the good we have done in Brian’s name”
“I often say through the most unfortunate circumstances we had the good fortune of meeting the most amazing people,” said Carla Caccavale. “All those who came out today exemplify exactly this. Especially Leanne and everyone here who upholds the solemn vow to never forget. Our family is incredibly honored and is committed to paying it forward to honor another fallen hero. I think it’s safe to say that my Dad, Brian, and Andrew are beaming down with pride.”
Sheriff Toulon was honored to help carry on the memory of Fallen Suffolk County Correction Officer Andrew Reister and thanked all those involved for facilitating the vest donation. “There is a strong and unique bond among law enforcement families who have lost loved ones. It was a pleasure to share this time with Stacey and her family, and we are incredibly grateful to the Simonsen Foundation, Blue Lives Matter K9, and the Capital K9 Association for their support, and for the excellent workmanship by Armor Express. Reis will be well protected.” said Sheriff Toulon.
“As a former New York City Police Officer and President of the Suffolk County Deputy Sheriffs PBA, it is truly a privilege to be a part of this ceremony honoring our fallen brothers,” said John Becker.
Lindsay Ekizian, Founder of Blue Lives K9 said, “Since the inception of Blue Lives K9 we have strived to collaborate with amazing people for various K9 causes. This is a prime example of great people coming together to make sure our four legged heroes are protected while honoring those heroes we have lost too soon.”
Sal Khan of the Capital K-9 Association said, “The Capital K-9 Association team understands the critical role that Police K9 teams play in our communities and the inherent dangers associated with this role. With that, Capital K-9 Association has made it our mission to provide lifesaving ballistic vests and safety equipment to working Police K9's across the nation to ensure our 4 legged Police K9’s make it home safely.  Since 2011, we have proudly protected over 110 K9's and look forward to supporting more K9 teams in need of help.”
“Our passion for producing the most innovative lifesaving armor systems is made possible by the commitment of every Armor Express employee.   We are honored to collaborate with these amazing foundations to honor the legacy of Det. Simonsen, Det. Caccavale and Correction Officer Reister as we present K9 Reis with an Armor Express Tex10 K9 ballistic vest,” said Robert Hogan, Director of Armor Express.