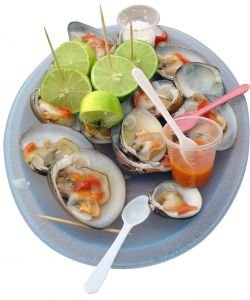 Long Island, NY - April 4, 2014 - Shellfishing areas in several towns in Nassau and Suffolk counties that were closed on March 31 have been reopened, the New York State Department of Environmental Conservation (DEC) announced today. The areas are being reopened after DEC's Bureau of Marine Resources collected and tested water samples which showed that water quality in those areas meets the standards for certified (open) areas.
Most shellfishing areas around Long Island were designated as uncertified (closed) on Monday, March 31 following the extraordinarily heavy rainfall and stormwater runoff that affected Long Island over the previous weekend. Rainfall in many areas exceeded four inches, with as much as five inches in some east end towns.
DEC temporarily closes shellfishing areas to protect the public health. Stormwater runoff caused by heavy rainfall carries bacteria and other pathogens into adjacent surface waters. When water quality in the enclosed creeks, coves, harbors and bays is adversely affected be excessive runoff, shellfish in those areas have an increased potential to be hazardous for use as food.
The following areas were reopened to shellfishing effective at sunrise on Friday, April 4:
The following areas will reopen to shellfishing effective at sunrise on Saturday, April 5:

All other areas designated as temporarily uncertified on March 31 remain closed to shellfishing. DEC will reopen the remaining areas as soon as possible based on the results of water quality testing to be conducted during the week of April 7.

A recorded message advising harvesters of the status of these shellfish areas may be heard at (631) 444-0480. The message will be updated during the course of the temporary closures. For more detailed descriptions of the closed areas please call the office during normal business hours at (631) 444-0492. Additionally, information about temporary closures is available on DEC's website.