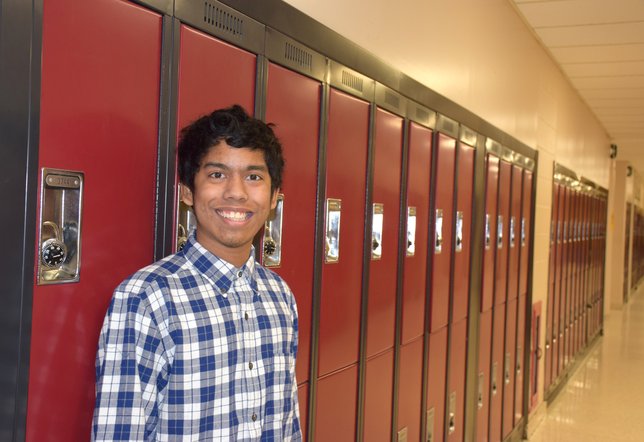 His award-winning works include, “The Architect,” a short story about a London architect who is abruptly summoned, somewhat unwillingly, to design a home; “Spectator” a personal essay about a young man coming out of his shell; and “On the Elusiveness of Joy,” a portfolio of three poems.

“Gary is an ideal student.  As well as modeling behaviors that evidence intrinsic motivation and an incredibly strong work ethic, he has a natural ability to communicate complex and insightful ideas with clarity and conviction,” said Viveca Nargi, English Department Chairperson, William Floyd School District.

Gary will attend Stony Brook University in the fall to pursue a career as a psychologist. While he doesn’t plan on pursuing a career as a writer, he won’t be putting his pen down anytime soon. He aims to continue writing stories on the side, particularly on the topic of mental illness, which he hopes will help eliminate the stigma of issues like depression and anxiety.

Gary is an avid reader in his spare time. Among his favorite authors are Charles Dickens, the Brontë sisters, J.R.R. Tolkien, Jane Austen and Oscar Wilde; two of his all-time favorites are the literary masterpieces Lord of the Rings and Great Expectations. He also enjoys listening to music and playing his violin.

Gary’s writings, along with the more than 320,000 other works submitted, were judged based on the program's three criteria: originality, technical skill and emergence of personal vision or voice. Student works are adjudicated regionally through local Affiliates of the Alliance.

Scholastic Art & Writing Awards are the longest running, most prestigious competition and largest source of scholarships for teenagers in the United States. The Awards program was created in 1923 by Maurice R. "Robbie" Robinson, founder of Scholastic Corporation, and has been administered by the Alliance for Young Artists & Writers since 1994.

It has an impressive legacy and a noteworthy roster of past winners including Andy Warhol, Frances Farmer, Sylvia Plath, Truman Capote, Richard Avedon and Joyce Carol Oates, among many others.

Established to ensure that literary and artistic talent were recognized in schools and communities across the country, the program began as a small writing contest; today, it offers recognition in 29 diverse categories including architecture, sculpture, painting, photography, poetry, dramatic script, fashion, animation, and video games.

The Awards are open to all students in grades seven through 12 from public, private and home schools throughout the U.S. (and its territories), as well as American-operated schools abroad and community programs serving eligible student populations.

An Excerpt from “The Architect”
“I am an architect; a knight of design. My quill pen is my sword, a blueprint, my shield, although when taken in a literal sense, I suppose these instruments may not be as useful as their medieval counterparts. I was enjoying a particularly delightful cup of tea this morning, when a sudden rapping at the door caught my attention.

Naturally, I took a few more sips from the cup, so as to keep my unexpected visitor waiting for a little while longer. When the light knocks escalated into a bout of slamming, I knew that it was time to act. Gathering my bearings, I went to the door, yawning twice, before granting the visitor entrance to my humble apartment.”