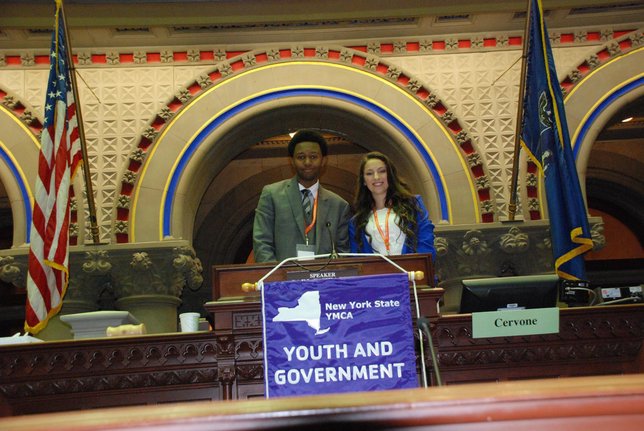 Albany, NY - March 22nd, 2016 - The William Floyd Youth & Government Club continued its dominance at the 80th annual New York State YMCA Youth & Government conference held earlier this month in Albany. Under the steady guidance and leadership of advisors Robert Feeney and high school social studies teacher Patricia Costell, the students descended upon Albany along with 500 of their peers from across New York State to campaign, elect and lead a simulated government inside the state’s actual legislative chambers.

“It is simply amazing how William Floyd continually outperforms their competition at this conference every single year,” said Kevin M. Coster, Superintendent of Schools, William Floyd School District. “To capture nine of the  12 leadership positions and a host of awards in a statewide competition – and to consistently meet or approach that number year after year – is a testament to the dedication of the students as well as their advisors, Mr. Feeney and Ms. Costell. It is great to see so many students involved and passionate about taking an active role in leadership and learning about government and public policy.”

Additional photos can be found on the William Floyd School District flickr page.