New cards will begin to be issued in July, and include black and white portraits on a hard polycarbonate card. 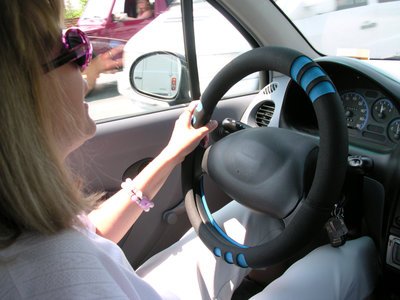 Beginning in July, drivers who visit the Department of Motor Vehicles in New York for new or updated licenses will receive cards with a whole new look.

The new driver’s license will feature the driver’s picture in black and white, with the rest of the card in color.  This is a strategic move for the DMV, as it will change how people cross-check a driver with his or her license.

"If you were trying to substitute someone with blond hair you will dye your hair blond and look a little like that.  If you have a black and white photo, they're actually more focused on your physical features,” said DMV Investigation Director Owen McShane.

The bendable cards will also be replaced by hard polycarbonate ones, which are supposed to be less easy to reproduce.

Personal data will be laser engraved onto the cards, as opposed to merely being printed onto the material as they have been for years, and cards will also be engraved with fine lines, patterns, and micro letters to make each one harder to reproduce.  Altogether, there are about 30 security features, including one of the most visible changes: a small “ghost image” of the driver, which is a small, second portrait in the lower right corner that will be visible from both the front and back of the license.

The counterfeit driver’s license business has been growing throughout the years, especially since the market has easily expanded online.  Counterfeiters largely cater to underage drinkers, but state officials worry that counterfeit cards can also be used to conduct more serious crimes, including terrorism.

According to the DMV, each new license will cost about $1 more than the licenses currently in effect, but the cost will not be passed on to the driver.