Lake Grove's Robert DiGiacomo is enjoying the fast success of PaddleZlam, a new sport that is sweeping the nation. 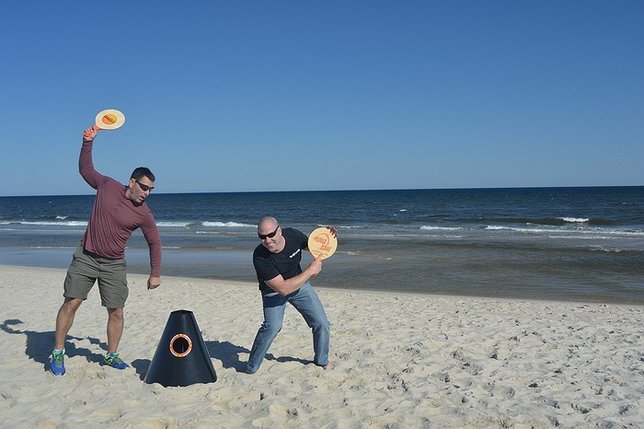 Robert DiGiacomo (left) and his brother demonstrate the excitement of PaddleZlam.

Robert DiGiacomo of Lake Grove is married with three kids, and is a telecommunications project manager who's been working with the New York City Department of Education for the past 13 years. With that being the case, would you think of a man slugging it out in the tech field to be the home-grown inventor of PaddleZlam, the hottest new sports craze sweeping the nation? 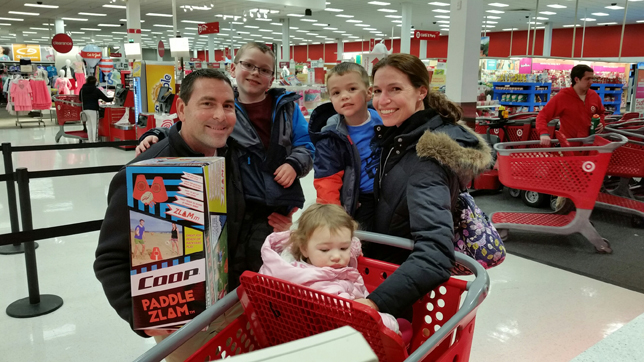 However, that is indeed the case; a good many might be surprised to know, in fact, that DiGiacomo has been designing toys and various other contraptions for many years now.

“Since I was 12 years old, I've been designing toys and making games, but this is the first one that's actually gotten some traction,” he said. “We took it to the New York Toy Fair at the Jacob Javits Center in Manhattan a year ago, and that's where we got recognized and picked up by a company called Spin Master.”

PaddleZlam is simple and yet at the same time exhilarating. It typically accommodates four players, although there are variations that allow for many more; DiGiacomo describes it as the “pickleball, volleyball, beach paddle ball version of KanJam.” It's a fast-paced, striking game, which DiGiacomo describes as difficult to master but so incredibly addictive you can't help but desperately want to play it again and again.

“For beginners, it takes a little bit of trial and error, no doubt,” he said. “But how it entices people to want to play is that they'll see themselves getting better, and as you improve it forces you to want to play more. It becomes a bit of an addiction, and that's certainly the case with me...I've been playing it for the past four and a half years.”

KanJam is a popular Frisbee sport where you throw a disc into a round cylinder, and it is this sport – sprinkled with aspects of pickleball and several others – that make up the foundation that PaddleZlam is built upon, DiGiacomo said.

“Essentially, PaddleZlam is similar to KanJam, but it involves a pickleball - which is sort of like a waffle ball - four paddles, and two large gaming cones that look like bright orange cylinders,” he said. “You set the cylinders up about 15 to 20 feet apart from each other, and – via precision paddling, volleying, and running – you basically try to get the ball into or against the cone. If you miss, you have a partner there to assist it into the cone, or to bump it up into the air, where you can spike it into the cylinder like in volleyball. However, when it comes to driving the ball back and forth between the cylinders, it plays a little more like basketball with paddles.”

DiGiacomo extolled the virtues of PaddleZlam, noting that in addition to being a fun, active sport that gets kids off of the sofas and away from their computers and into the great outdoors, it also encourages positive social aspects, including teamwork, group effort, and cooperation. 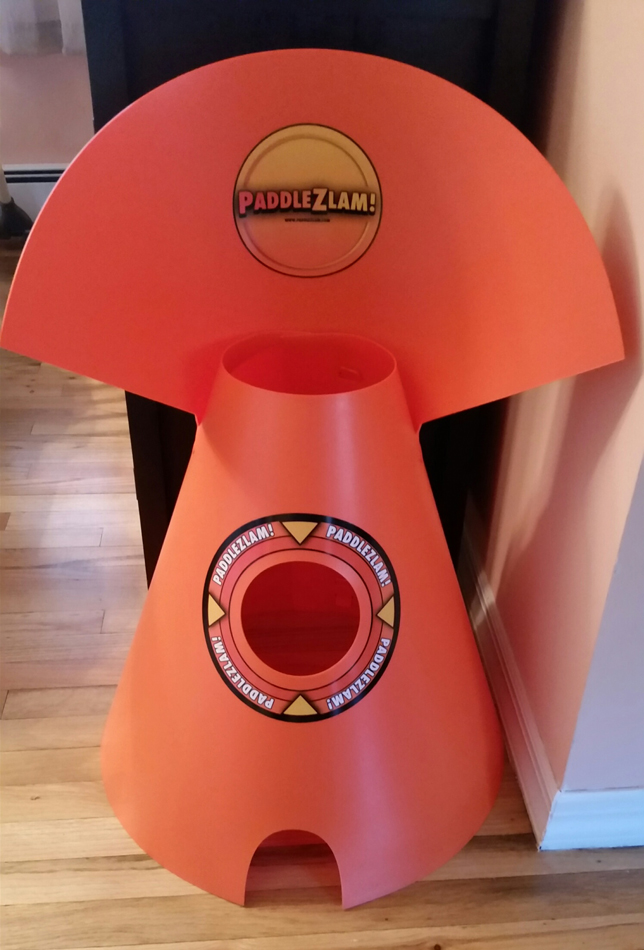 Once he refined and finalized the concept, DiGiacomo poured a great deal of time and money into creating prototype equipment and promotional material, which he took on the trade show circuit; after being picked up by Spin Master, a large multinational toy and children’s entertainment company, 2017 saw PaddleZlam featured in Target stores throughout the United States, where it has enjoyed brisk sales and excellent reviews. So many positive reviews, as a matter of fact, that DiGiacomo was contacted by Target, who expressed doubts that any one product could produce so much singularly positive feedback; apparently, they had trouble buying the idea that PaddleZlam was just that good, but as the praise continued unabated, Target were soon true believers in DiGiacomo’s product.

Under his deal with Spin Master, DiGiacomo retains the rights to sell PaddleZlam online, as well as to smaller retail chains and specialty stores across the country; larger retail chains, however – such as Target – are handled exclusively by Spin Master.

“You can go out right now to Anchorage, Alaska, or Waikiki, Hawaii, and you'll find PaddleZlam on a Target shelf,” he said. 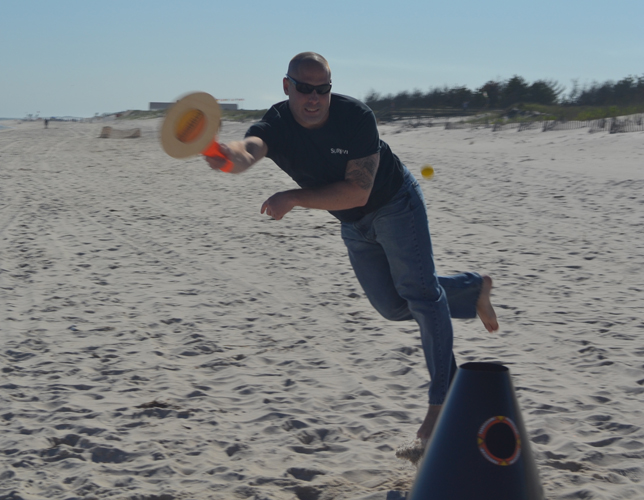 PaddleZlam is a fast-paced game which is described as difficult to master, but so incredibly addictive you can't help but desperately want to play it again and again. Photo Credit: Robert DiGiacomo

Upon having his invention picked up and distributed by a major company, DiGiacomo has been on the road, attending various trade shows and conventions to promote PaddleZlam; in addition, school districts far and wide have expressed interest in incorporating the game into their physical education classes.

“It's just been a blast…I've had a great time going to all the shows, and you also sell product, which is good as well,” he said. “But more importantly, you're out making a name for yourself, and you get invited back to go to other conventions, which in turn gets your name out there even more.” 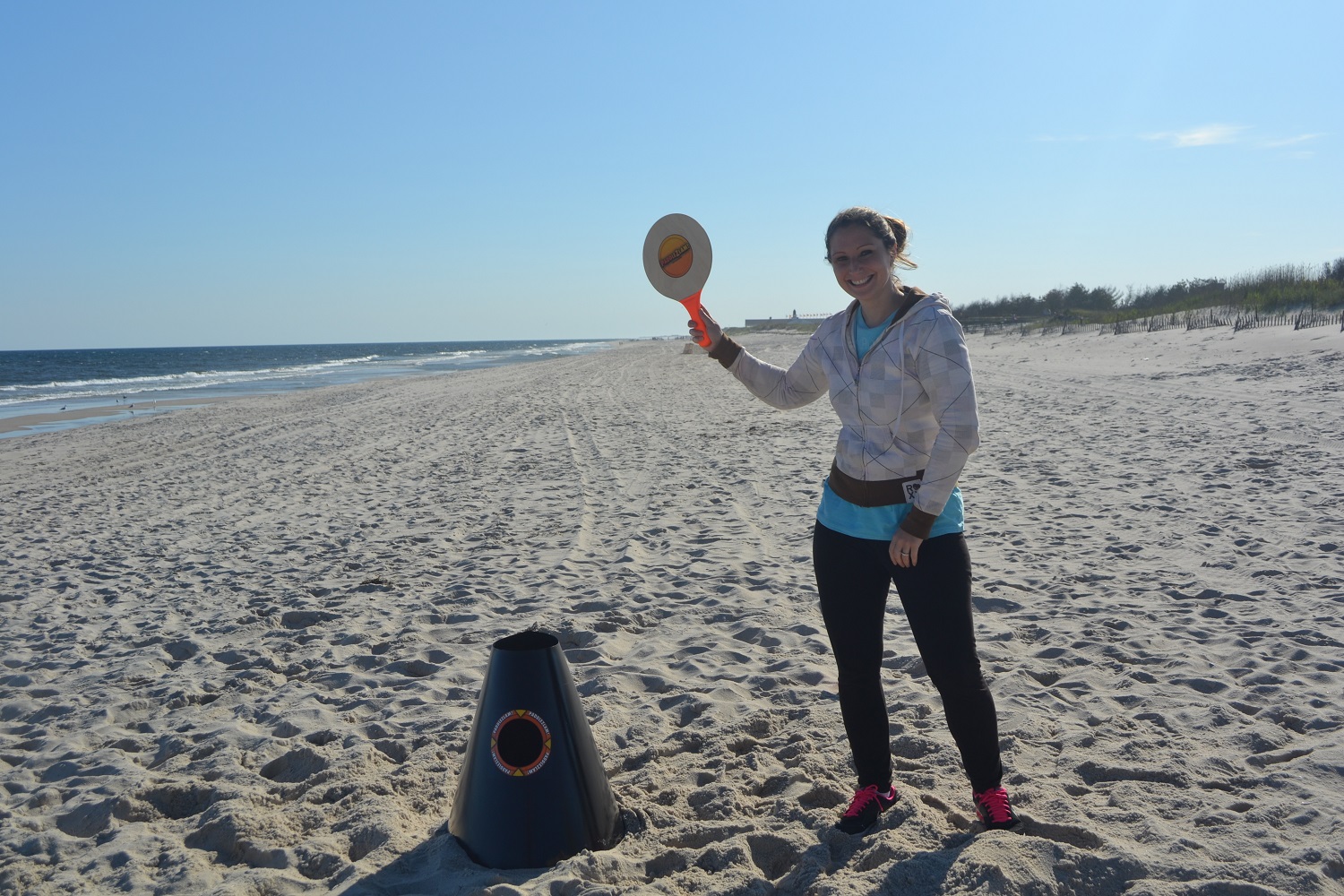 DiGiacomo relayed the experience of actually being able to go into a major national retailer with his proud family and seeing his very own product – created with his own blood, sweat, and tears and their never-ending support – on the shelf, making all the hard work more than worth the effort, he said.

“My family and I went into our local Setauket Target, and we picked up a PaddleZlam off the shelf…we brought it up to the courtesy desk and we called over the manager of the store,” he said. “I introduced myself and told him I was the creator of PaddleZlam, and then we bought it and they took a picture of us with it...it was really just the most amazing feeling, doing that. And I really wouldn't have gotten to that point if it wasn't for the continuous support of my family and my friends, and I want to thank them all.”

PaddleZlam is available through Target or directy from DiGiacomo and his official website: PaddleZlam.com.