Food items include healthy alternatives as well as burgers and fries. 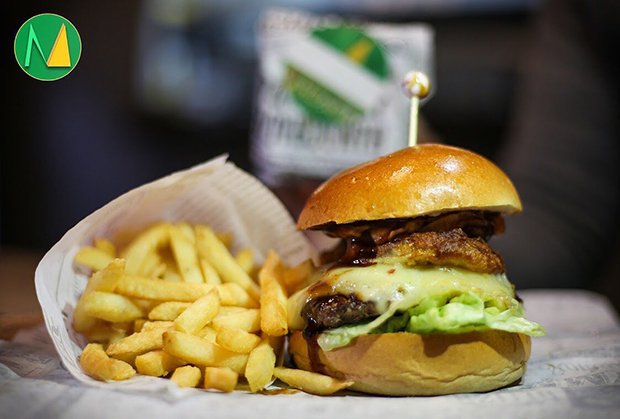 Meant to satisfy the crave for the health conscious eater and those looking for a big juicy burger, Munchy’s was opened a little over three weeks ago by Adelphi student Hassan Asif.

On the healthy side they offer a create your own salad and smoothies like a peanut butter banana smoothie called The White or Mother of Berries (MOB), constraining strawberries, raspberry and blackberry (Regular $5.99/Large $6.99).

They also serve bubble teas as well as appetizers.

“We target health conscious people as well as those who want to eat burgers and sandwiches.” Asif told us in an email.

Their tagline is “You Crave. We serve!”

The location at 719 Fulton Avenue was previously a deli.

While the main demographic for Crave is probably students from surrounding colleges and universities like Hofstra, Adelphi, Nassau Community College, and Molloy (all are only a few minutes drive from Crave), Asif said that he sees lots of locals and families come in.

Asif is a Junior at Adelphi University studying management and marketing. This is his first restaurant.

As the name implies, the focus is on the quick bites. Asif said that he also benefits from students who are at the bars right near his restaurant looking for late night food. The name telegraphs to the students what they are getting here.

“We offer continuous discounts to the students in the area and we’re open till 3:30am on Thurs-Sat serving people who go out as there are fewer places open at that time,” said Asif. “The ambience we have provided our customers is great, and no place in the area gives that ambience.”

He paid particular attention to the logo, which has a bright color palette and design that reflects his menu. The logomark has a simple iconic look to it.

“If you look up the logo closely, it is an M with cheese,”  Asif said when asked about the design. “Also if you zoom in, the cheese has some layers which makes it a sandwich.”

Reviews have been almost all positive.

Zain H. from East Meadow, said on Yelp  that Munchy’s did not disappoint.

“Will be back again soon I'm sure,” he wrote.

“Literally 3 minutes from Hofstra University. The food was amazing. The atmosphere equally the same. The service was great,” he wrote.