Held on May 3 at the newly-renovated Nassau Coliseum in Uniondale, the event combines education, information, and support for the Long Island business community. 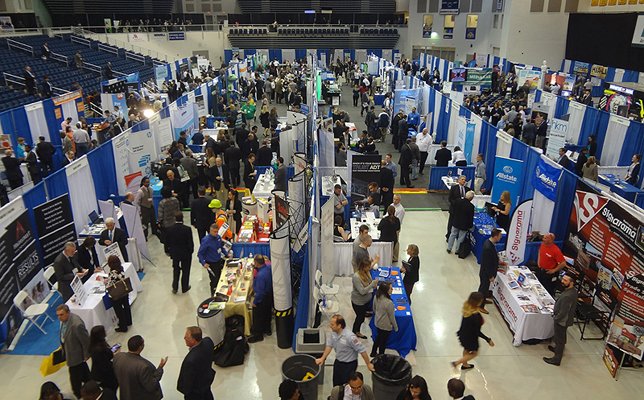 The show floor of the first annual Long Island Business Expo, held last year at Hofstra University in Hempstead, NY. The Expo will be moving to Nassau Coliseum for 2017's event.

After the unbridled success of the inaugural 2016 Long Island Business Expo, the much-lauded annual event makes its proud return on May 3, 2017 while receiving a major upgrade in its venue that is sure to push the Expo to the next level and beyond.

Originally held on April 21, 2016 at the David S. Mack Sports and Exhibition Complex at Hofstra University in Hempstead, the Long Island Business Expo is an offshoot of the New York Business Expo, an event held annually at the Jacob Javits Center in Manhattan that has been heralded for the tools and resources it has been offering the professional community since its inception in 2006. 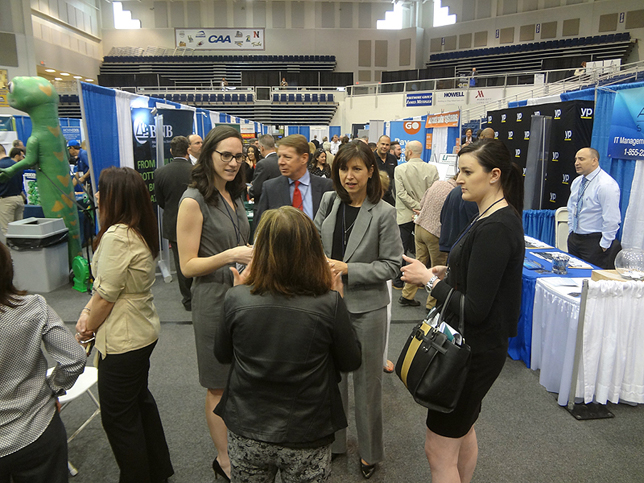 Given the massive success of its first Long Island-based offshoot – over 160 companies attended from Long Island, Manhattan, and across the country, as well as the thousands of guests who packed into the building – the Business Expo is moving across the street to a new venue that will allow it to evolve, expand, and grow- the newly-renovated and rejuvenated Nassau Veterans Memorial Coliseum in Uniondale.

Among the attractions at last year’s Long Island Business Expo were numerous seminars, a Social Media Lab where professionals could learn about the importance of platforms such as Facebook, Twitter, Instagram, LinkedIn and other websites and applications that could be used to promote their businesses, and keynote speakers who shared their know-how over the course of the day, including Julie Hochhalter of Google and Ramon Ray of Smart Hustle Magazine and Infusionsoft.

Event Management LLC President Marc P. Sherer, creator of both the New York and Long Island Business Expos, said that he was very excited over the Long Island event’s move to Nassau Coliseum this year, noting that it possesses everything the Expo needs to advance its offerings to the business community to levels previously thought unobtainable.

“The first year of the show was met with huge applause, congratulations, and success on behalf of the vendors and the attendees,” he said. “However, the size of the building didn't really allow us to do everything we would have liked, so when we had the opportunity to move the event and be the first trade show in the new Nassau Coliseum, it was a no-brainer for us. The building has ample size for this event to grow, in terms of all of our benchmarks…in terms of exhibitors, that aspect is almost going to double in size because of the move.” 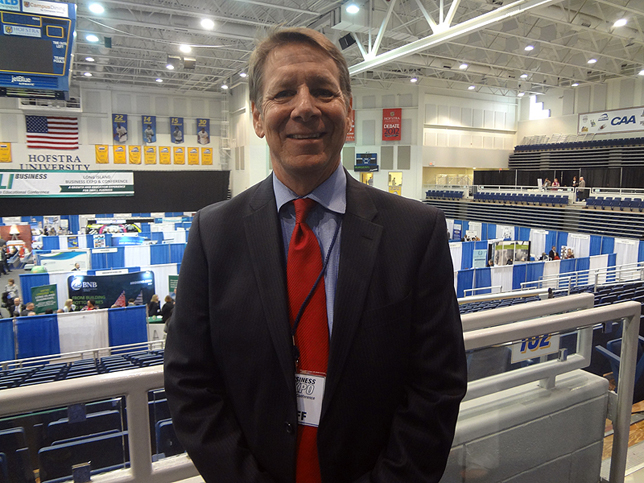 Sherer noted that he's already toured the newly renovated Nassau Coliseum three times, and said that the work that's been done upgrading the facility into the 21st century has been truly remarkable.

“What they've done with the building is really breathtaking...they've kept the shell, but they ripped the interior out and exterior off and rewired the whole building...all the Telecom is new, all of the infrastructure and wiring is new, all of the seats are new, they ripped out all of the sky boxes and change the configuration and the look and feel of all the sky boxes,” he said. “Plus, we went behind the scenes and all of the areas there were completely redone as well. It's very beautiful, top-notch. Plus the mezzanine level, where all of the concession stands are, was completely ripped out and redone, with all new concession stands, and Nassau County announced last week that they're using all local vendors for the food services in the building.”

“Overall, the building is beautiful,” Sherer added. “People are really going to find it breathtaking when they see it.” 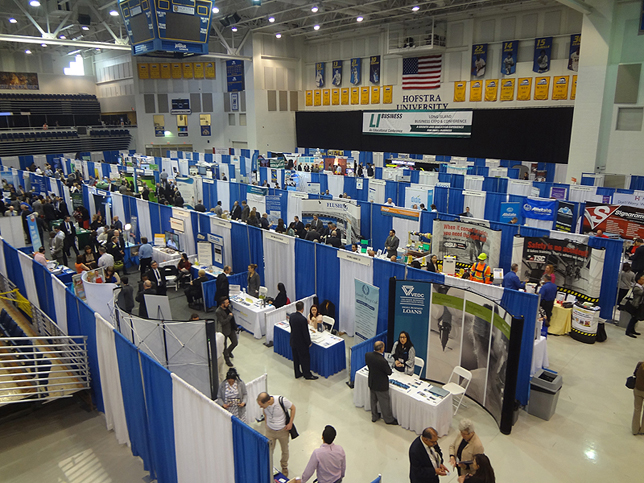 Last year's Long Island Business Expo attracted approximately 3600 attendees; Sherer noted that, in addition to the expanded programming and amount of vendors at this year's Expo, the fact it is going to be the first business-oriented event at the new Nassau Coliseum is already causing pre-registration to swell to numbers that will most likely dwarf the previous year’s attendance.

“This year, two months out from the event, we already have 2,000 people pre-registered already,” he said. “So the next two months, we expect that number to significantly grow. Of course, a good reason for that number is the tremendous value that people in the business community see in the in this event, but it's also a good chance for people to get a look at the new Coliseum for the first time, and that's definitely bringing in people as well.”

Sherer noted that the Long Island Business Expo will be expending nearly every aspect of its programming for 2017, which means more vendors, more speakers, and more networking opportunities than any other business-specific event in the region, by far. The event will have a total of three major keynote speakers, 15 seminars, a VIP networking session, and numerous other programs for attendees to sharpen and expand their business horizons.

“We’ll have a minimum of 15 education sessions running, many of which will center on marketing for the small business owner,” he said. “There's going to be some really, really great content available, and it's all going to be a part of an enhanced attendee package, which any LongIsland.com reader can have by using the promo code LICOM when they register at BusinessExpoLI.com.” 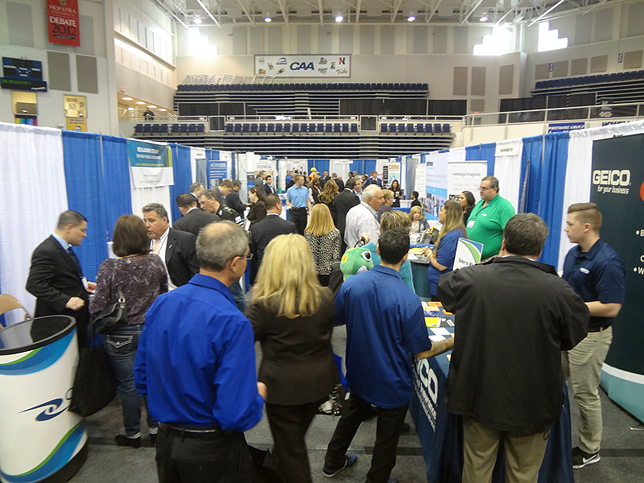 Sherer also stated that they have announced their first 2017 Long Island Business Expo keynote speaker, and it is none other than David Meltzer – a business leader, author, and humanitarian best known for his work in the field of sports marketing.

“I am so proud to have David as our keynote speaker,” Sherer said. “He's been named as one of the top ten keynote speakers in the world by Forbes Magazine, and he's gotten a tremendous amount of media exposure. He often speaks of the point of doing good with your business, and the importance of reinventing yourself according to what's important to you, and I think that he's tremendously motivating. I think David fits in with the overall theme of the show and we’re honored to have him this year.”

Another exciting new aspect of this year's Long Island Business Expo, according to Sherer, is that the registration process will put individuals and companies already affiliated on business networking sites such as LinkedIn with the ability to get in touch with each other before the show; Sherer notes that this is a way for people who may be affiliated professionally but never having met in person to finally put a face to the names that they know so well, giving the show a unique social aspect that many others of its ilk lack. This ability, in addition to full access to programming schedules, floor layout, and more are available through a free app that attendees can download from the registration site and use on their smartphone of choice. 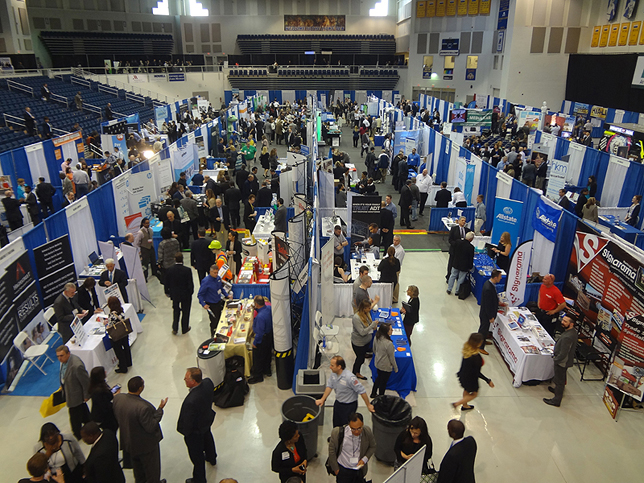 Sherer said that he can easily see the Nassau Coliseum as the ongoing home for the Long Island Business Expo, given the flexibility and cutting edge accoutrements that its recent makeover provides for event holders, ensuring that the Business Expo will become a shining beacon to entrepreneurs throughout the Long Island and New York region for many years to come.

“There's always room to expand, always more room for growth, and this building finally allows us the opportunity to do that,” he said. “I'd be fine with making the Nassau Coliseum the home of the Long Island Business Expo…it's easily accessible and everyone knows where it is, and it finally allows us to achieve the full potential of the event to benefit Long Island business owners.”