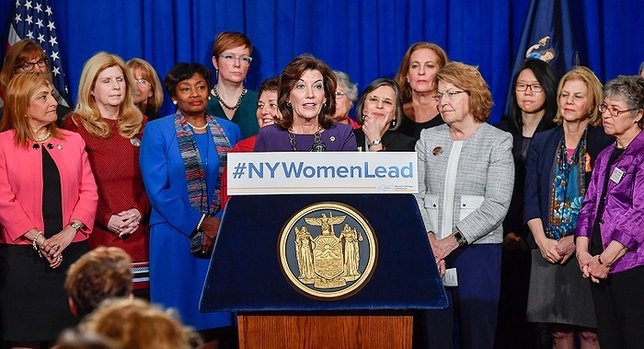 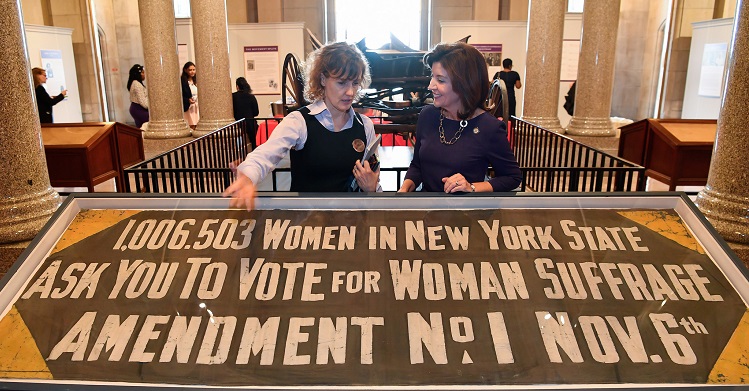 "This month, we celebrate the critical role that New York played in the fight for a woman’s right to vote from the Seneca Falls Convention all the way to the passage of the Women's Equality Agenda in 2015 because in New York we know that women’s rights are human rights," Governor Cuomo said. "I encourage all New Yorkers and visitors alike to visit one of these exhibits and trace the historic timeline that New York’s women pioneered and to learn about the obstacles that they conquered in the fight for equality."

New York was home to the first-ever Women's Rights Convention, held in Seneca Falls, on July 19 and 20, 1848 and organized by Lucretia Mott and Elizabeth Cady Stanton. Sixty-nine years later, on Nov. 6, 1917, women in New York State won the right to vote.

“New York women have an enduring legacy in the pursuit of equal rights that began nearly 170 years ago in Seneca Falls, and as a result of their advocacy this state passed women’s suffrage three years before the rest of the nation. This year we celebrate the accomplishments of the women who led the fight for equality, setting the stage for future battles against workplace discrimination, in support of pay equity, and to preserve a woman’s right to make decisions about her health care," said NYS Women’s Suffrage Commission Chair, Lieutenant Governor Kathy Hochul. "As the state’s highest ranking elected woman, I consider it my mission to inspire the next generation of women to rise up and shape a more just, equitable society."

The 14-member NYS Women’s Suffrage Commission, chaired by Lieutenant Governor Kathy Hochul, will plan and execute a series of statewide programs starting in 2017, which marks the 100th anniversary of women’s suffrage in New York, and lasting through 2020, a century after the ratification of the 19th Amendment granting all women in the United States the right to vote.

“As someone who benefitted greatly from the suffragists’ efforts, I am proud that OGS is highlighting their accomplishments in these special tours and exhibits,” Commissioner RoAnn Destito said. “I encourage everyone to take the time and learn about New York’s place in history as the birthplace of the women’s rights movement and as one of the first states where women were granted the right to vote.”

“New York was the birthplace of the modern women’s rights movement and we have a responsibility to build on that legacy and continue the progress,” said Senate Democratic Leader Andrea Stewart-Cousins. “Our state has been fortunate to have many strong women who worked, sacrificed and fought to build a fairer and more equal society.  Women’s History Month is a chance to recommit ourselves to come together to support women and pass pro-women legislation.”

"This year's centennial of women’s suffrage in New York State is a once-in-a-lifetime opportunity to celebrate this momentous achievement," said Senator Betty Little, who sponsored the legislation creating the commission.  "I am incredibly honored to serve on the suffrage centennial commission with Lieutenant Governor Hochul and many other accomplished women. Generations of women before us struggled, sacrificed and persevered, assuring our right to vote and creating a chance for us to lead.  We must make the most of this important time to educate a younger generation of the historical significance of women's suffrage and our State’s unique role in women gaining the right to vote nationally."

“Throughout history, NYS has been a national leader in advancing women’s rights,” said Assemblywoman Donna Lupardo, Chair of the Legislative Women’s Caucus. “As we recognize the 100th anniversary of Women’s Suffrage in the state, it is important to note that 58 women currently serve in the State Legislature, a percentage higher than the national average. The Legislative Women’s Caucus is honored to continue the tradition of promoting issues and concerns of importance to women across the state.”

“For over 100 years, New York State has played a pivotal role in the women’s rights movement, and the City of Albany is proud to be the capital of that progress,” said Albany Mayor Kathy M. Sheehan.  “As the City of Albany’s first female Mayor, I am proud that our City carries forward that same commitment to equity and equality to this day. Thank you to Governor Cuomo and Lieutenant Governor Hochul for honoring the important role that women have played and continue to play in the history of our great State.”

As part of New York’s recognition of Women’s History Month, a number of exhibits will be available for public viewing in both the Empire State Plaza and the New York State Capitol Building. The exhibit “Women’s Suffrage in New York State,” located in the Capitol corridor which connects the state house to the Empire State Plaza, will include imagery of pro- and anti-suffrage propaganda with historic photographs of the women who organized and marched until the vote was won. The exhibition offers a glimpse of this historic struggle and groundbreaking victory for women’s rights.

The exhibit, “New York State Women’s Suffrage 1917 – 2017 | The Fight for the Vote and the March for Full Equality,” is located in the East Gallery on the second floor of the Capitol and traces the almost 70-year struggle for the vote. The exhibit highlights the lives of 12 influential Suffragists and the critical role they played in securing the vote by African Americans and working women. This month-long exhibit features the “Spirit of 1776” wooden suffrage wagon in which a Long Island Suffragist and her eight-year-old daughter traveled throughout Long Island and Manhattan during the summer of 1913 to spread the importance of votes for women, a 1917 banner carried by Suffragists, and Elizabeth Cady Stanton’s 1854 address to the New York State Legislature.

One of the highlights of the New York State Capitol is the Great Western Staircase, which features a gallery of historic Americans brought to life in elaborate stone carvings. As the staircase was nearing completion, it was observed that not one famous woman was represented. Located in the area just outside the Empire State Plaza Visitor Center and Gift Shop this exhibit will feature photographs of the six carvings of women that were added to the staircase: Harriet Beecher Stowe, Clara Barton, Frances E. Willard, Molly Pitcher, Elmina Spencer, and Susan B. Anthony.

Throughout the month of March, special one-hour Capitol tours focused on the suffrage movement will be available to visitors. The tours will feature artifacts selected to showcase the suffragists’ journey. For more information about the Capitol tours, visit www.empirestateplaza.org.

In addition, events and celebrations are also planned across New York State to mark the centennial.

During VoteTilla Week, scheduled for July 16-22, 2017, participants will travel in canal boats from Seneca Falls to Rochester, concluding with a final celebration at the National Susan B. Anthony Museum & House. Along the way, boats will dock at towns and villages for historic re-enactments, speeches and music, co-hosted by local groups and partner organizations including the Canal Society of New York State, Seward House and the University of Rochester’s Susan B. Anthony Center for Women’s Leadership. Also in Rochester, the Central Library of Rochester, which will be honoring the centennial with an exhibit titled "Because of Women Like Her," a collaboration between a number of partners that aims to draw visitors into the history and its contemporary implications.

In Fayetteville, near Syracuse and the site of the 1852 National Women’s Rights Convention, visitors can tour the home of suffragette Matilda Joslyn Gage. Gage, along with Anthony and Stanton, was a founding member of the National Woman Suffrage Association. The museum looks at Gage’s work and strives to focus attention on current social justice issues. Shakers were also early proponents of women’s rights and suffrage and the Shaker Museum/Mount Lebanon, in partnership with Bard College at Simon’s Rock, will be presenting a special exhibition, walking tour and public and academic programs this year in honor of the centennial.

Information on these, as well as other important historical sites connected to New York’s leading role in the fight for racial and LGBT equality and justice are available at www.paththroughhistory.com and www.iloveny.com/milestones.