(Mostly) True Things March performance will be at The Dolphin Bookshop in Port Washington on March 26th at 7 PM. 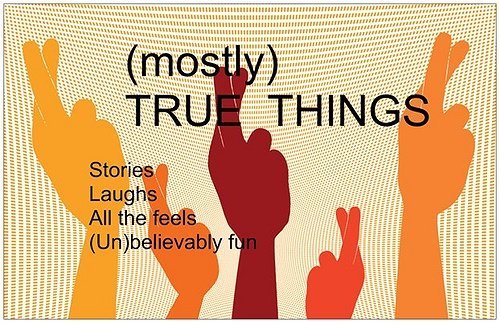 Port Washington, NY - February 29th, 2016 - The March 26, 2016 performance of (Mostly) True Things, a monthly storytelling show that features true stories - with a twist - told live, without notes and the only one of its kind on Long Island will be at The Dolphin Bookshop and Café, 299 Main St. Port Washington, NY at 7 pm.

The line-up of storytellers includes Mary Theresa Archbold, whose story “Our Normal” was on NPR”s Moth Radio Hour and was interviewed in NPR’s This American Life episode titled “In Plain Sight,” Long Island comic Stevie Gb, and Robin Bady, who performs all over the world and offers storytelling shows in her Brooklyn home and was awarded the 2012 JJ Reneax Emerging Artist Grant.

This show is an entirely unique entertainment experience that includes hilarious and heartful stories as well as a game that involves the audience. All the stories except one include carefully-crafted deceptions, and the audience has an opportunity to question the storytellers, then vote for the person who told the unvarnished truth. Audience members who choose the correct person get a prize.

Tickets are $10 online until 5 pm on the day of the show, available on the Mostly True Things website. Tickets are $15 at the door (cash only).  Call 631-366-4265 to reserve seats. Complete information and ticket purchasing options are available at www.mostlytruethings.com.

Host/creator Jude Treder-Wolff is storyteller, singer/songwriter and writer/performer who is an active in New York storytelling scene, and offers Transformative Storytelling workshops and private coaching. She was featured onstage in the groundbreaking RISK! live storytelling show and podcast, and has told stories at The Moth in New York and Prose Of Pie in Tarrytown, NY. With musical director Wells Hanley she co-wrote the lyrics and music for the songs used to set up every stage of the game in (Mostly) True Things.

Her solo show Crazytown was selected  for the 2013 Midtown International Theater Festival, the 2012 Chicago and San Francisco Fringe Festivals and was performed at Actors Theatre Workshop, Broadway Comedy Club and The Pit-The Peoples Improv in New York, at the Charles B. Wang Center at Stonybrook University on Long Island and The Conservatory NJ in Trenton, NJ.