Legislator Lindsay Partners With Students to Collect Over 5,700 Valentine’s Day Cards for Veterans 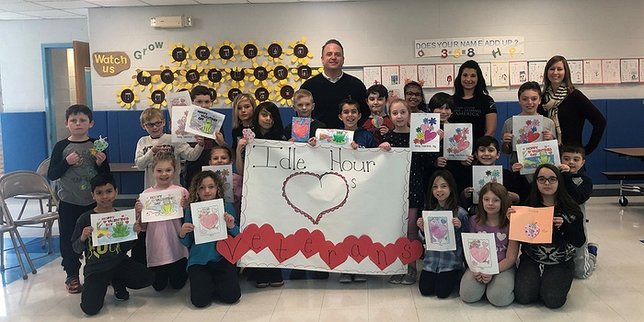 Holbrook, NY - February 21, 2019 - Suffolk County Legislator Bill Lindsay collected over 5,700 Valentine’s Day cards from schools throughout the Eighth Legislative District in support of his Valentines for Veterans initiative that he began just last year. In 2018 Legislator Lindsay collected 3,400 cards and hoped to reach or exceed that number this year. This second annual Valentines for Veterans initiative surpassed expectations by almost doubling the amount of cards received.
The goal of the initiative is to teach children and young adults the importance of appreciating the brave men and women who serve our Country every day, not just on Memorial Day or Veteran’s Day. It is imperative to bridge the gap between children in our communities and servicemen and women and veterans. In order to achieve this goal Legislator Lindsay collected cards from 19 schools throughout the district and delivered the cards to 30 active duty and veteran organizations including USO’s and the Long Island State Veteran’s Home.
This year’s collection sparked a sense of pride throughout the 8th Legislative District as Legislator Lindsay said, “The outpouring of support that this project has received over the past two years is incredible and I want to thank every child and teacher that took the time to make these cards for our servicemen and women. It truly is incredible to know that 5,700 veterans and service members around the world will be receiving notes of gratitude from our community this Valentine’s Day.  It’s important to me to implement community initiatives that connect our veterans, and our youth in way that mutual respect, and kindness are shared.”
Ronald Hurtado, founder and CEO of Airborne Tri-Team said, “I would like to personally thank Legislator Lindsay and his team for their selfless act in showing gratitude to the brave men and women of our great nation while who are deployed to the Middle East. Airborne Tri-Team received over a 100 Valentine’s Day cards from Legislator Lindsay’s office which I then distributed to team members that are located all over the globe. I can’t express to all of you enough the pride you get knowing even though you are far away you still have people like Legislator Lindsay taking time to make sure you feel the love and support from the community. Legislator Lindsay, we know that you have been a huge supporter not only of our military, but also of our organization Airborne Tri-Team, which helps veterans transition through sports and athletic. So once again, on behalf of the Airborne Tri-Team, thank you for your support.”
This successful community initiative could not have been made possible without the help of the following schools: Academy Street Elementary School, Sylvan Avenue Elementary School, Blue Point Elementary School, James Wilson Young Middle School, Edward J. Bosti Elementary School, Waverly Avenue Elementary School, Seneca Middle School, Sagamore Middle School, Lynwood Avenue School, Chippewa Elementary School, Sachem High School North, Cayuga School, Cherry Avenue Elementary School, Sayville Middle School, Idle Hour Elementary School, John Pearl Elementary School, Grundy Avenue Elementary School, Merrimac Elementary School, and Cayuga Elementary School.
The following veteran’s organizations, and active duty military stations were recipients of Legislator Lindsay’s initiative: VFW Post 433, VFW Post 2913, American Legion Post 1146, American Legion Post 651, American Legion Post 155, American Legion Post 1533, Long Island Cares, Northport VA, Long Island State Veterans Home, Veteran Center Services, Sons of AmVets/Squadron, USS Michael Murphy, Montauk Coast Guard Station, Shinnecock Coast Guard Station, MSD Coram Coast Guard Station, Coastal Riverine Squadron Eight, Chapter 11, Airborne Tri Team, The Veteran’s Place, St. Joseph’s College Student Veteran’s Association, USO Stuttgart, Joint Base Pearl Harbor-Hickam, and Yokota Air Base.
Suffolk County Legislator Bill Lindsay is the Chairman of the Economic Development Committee, Vice Chairman of the Parks & Recreation Committee, and Vice Chairman of the Government Operations, Personnel, Information Technology, and Housing Committee. Bill represents the 8th Legislative District.