Cartoonist, animator and writer, Mr. Fish, is Tom Needham’s special guest this Thursday on WUSB’s ‘The Sounds of Film.’ 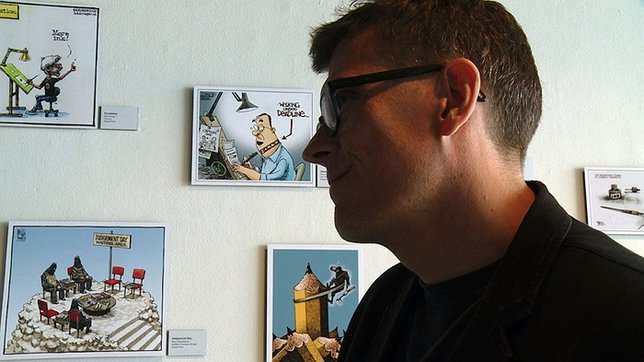 Mr. Fish in ‘Mr. Fish: Cartooning From the Deep End.’

Stony Brook, NY - February 20, 2019 - Acclaimed cartoonist, Mr. Fish, is Tom Needham’s exclusive guest this Thursday at 6 pm on WUSB’s ‘The Sounds of Film.’  They will be discussing Mr. Fish’s award-winning documentary ‘Mr. Fish: Cartooning From the Deep End.’
The feature documentary, ‘Mr. Fish: Cartooning From the Deep End,’ tells the story of Mr. Fish, a dangerously funny cartoonist struggling to make a living in a field that is disappearing. The film shows an uncompromising Mr. Fish who is unwilling to sell-out by making his work less offensive to various publications’ readers. When news organizations begin refusing to publish his work, Mr. Fish finds it increasingly difficult to provide for his family. Nevertheless, through it all, Mr. Fish seems determined to remain dedicated to his radical artistic vision. The documentary, directed by Pablo Bryant, recently won the Audience Award at the Austin Film Festival and the Grand Jury Award at the Slamdance Film Festival.  The movie is currently available on iTunes and Amazon Prime Video.
Mr. Fish’s work has appeared in many of the nation’s most prestigious magazines, journals and newspapers including Harpers, Truthdig.com, The Los Angeles Times, The Village Voice and Vanity Fair. He has published two novels, two collections of short fiction and cultural criticism, and wrote two screenplays. He has also written, scored and designed the animation for three original television series.  In addition, as the Dwayne half of the musical group Dwayne and Jeff, he has released five CDs.
About the Sounds of Film
‘The Sounds of Film’ is the nation’s longest running film, music and ideas themed radio show. For the past 30 years, the program has delivered a popular mix of interviews and music to listeners all over Long Island, parts of Connecticut and streaming worldwide live on the internet. Past people interviewed for the show include Chris Hedges, Truthdig.com’s Robert Scheer, Public Enemy’s Chuck D, Comedian Lee Camp, Laurie Anderson, Wallace Shawn, Bill Ayers, Abby Martin, Michael Moore, Rory Kennedy and Katrina vanden Heuvel.