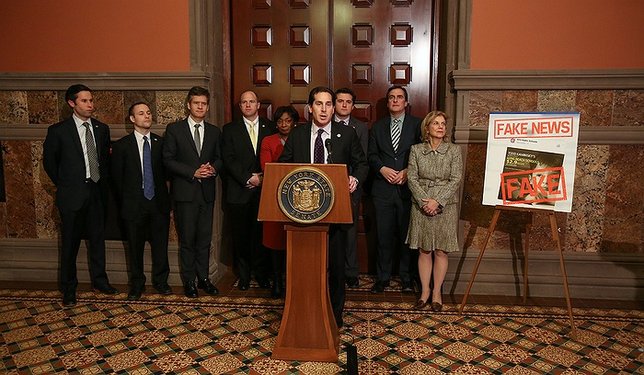 Albany, NY - February 13, 2018 - Today, Senator Todd Kaminsky and Assemblyman James Skoufis joined their colleagues in the legislature to include a measure in the final budget which will prevent anonymous political ads on social media. Governor Andrew M. Cuomo has already introduced such a measure in his Executive budget, and Skoufis and Kaminsky have introduced legislation in support of the regulations (A.8816 & S.6896A).
“False, misleading, and anonymous advertisements deceive voters and sabotage our democracy,” said Senator Todd Kaminsky. “Political ads on Facebook and other digital platforms should be held to the same standards as traditional political ads. Voters should be allowed to see who actually paid for these ads, and hold the authors accountable if they lie. Transparency is a necessary step toward restoring trust in government. I urge my colleagues in the legislature to advance this critical reform in the final budget.”
In September 2017, Facebook disclosed to federal investigators that it sold $100,000 worth of advertising to an international buyer in an attempt to influence the 2016 presidential election. Right now in New York, many forms of political advertisements carry no disclosure requirement. Skoufis and Kaminsky’s legislation would more accurately define what a political advertisement is, and require ads to disclose on their face who has paid for them with a “paid for by” statement.
The legislation would cover both digital and mail political advertisements, the vast majority of which are unregulated in New York State. The bill will also penalize any wrongdoing with a fine of up to $1,000 or up to the cost of the communication, whichever is greater.
NYS Assemblyman James Skoufis said: “There’s no place in our democracy for lying, anonymous advertising,” said Skoufis. “Social media has opened the floodgates, allowing deceitful ads to permeate our elections. Our common sense measure seeks to shine a much-needed light and, make no mistake, the only people to oppose us are those who are guilty of this political fraud.”
Senate Democratic Leader Andrea Stewart-Cousins said: “Dirty campaign tricks, misleading ads, and outright lies are poisoning our elections and fraying voter confidence in the political process. I applaud Senator Todd Kaminsky for stepping up to address this crisis by making digital ads come under the same regulations as broadcast and print media. We need to combat fake news and slanderous attacks head on, and that is why I am proud to support Senator Kaminsky’s legislation.”
Senate Democratic Deputy Leader Mike Gianaris said: “Updating state laws to address modern campaign tactics is a good way to combat nasty online attacks and lies that currently hide behind anonymity. I applaud Senator Kaminsky for stepping up and leading this fight.”
Background
On October 4, 2017, Senator Todd Kaminsky held a press conference with Senate Majority Leader Andrea Stewart-Cousins, and Senators Michael Gianaris, John E. Brooks and Leroy Comrie to announce legislation (S.6896A) to prevent anonymous and false political attack ads on social media. Senator Kaminsky also released a letter he had sent to Mark Zuckerberg, Chairman and CEO of ‎Facebook, explaining how the social media platform was used to deceive New York voters in his district, and warning him of future deceptive ads.