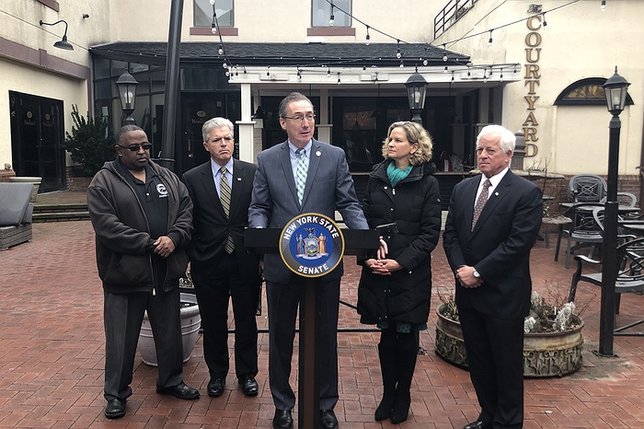 Plainview, NY - February 7, 2019 - Today Senator Jim Gaughran joined County Executives Laura Curran and Steve Bellone to announce Nassau and Suffolk counties intend to opt-in to a new state law that will allow a 90-day extension of property tax payments for federal workers on Long Island. The law will allow federal employees, spouses of federal employees who were furloughed, or non-pay federal workers a 90-day extension following a government shutdown to pay their property taxes. The bill was signed into law on February 1, 2019, and sunsets in June 2020, allowing additional extensions in the case of another federal government shutdown. They were joined by Assemblyman Chuck Lavine and Randy Brown, a Bay Shore homeowner and federal worker at NY TRACON, who worked without pay during the shutdown.
Senator Jim Gaughran said “While the federal government turned its back on thousands of federal workers during the tough winter months, I'm proud that NYS is standing up and offering a helping hand. This law to allow extended time to pay property taxes is vitally important for the thousands of federal employees who went 35 days without a paycheck. Since deadlines for tax payments to local governments differ across the state, it's essential that we continue getting this information out to federal workers so that they can take advantage of this small offering by New York State.”
Assemblyman Chuck Lavine said “I commend my Senate colleague Jim Gaughran on his efforts to ease the burden of the shutdown on Long Island government employees. I am confident that a 90-day extension will help those whom were negatively impacted and allow them the opportunity to get caught up with their financial obligations.”
Randy Brown, Bay Shore homeowner and NY TRACON Operations manager, said “I missed two paychecks during the government shutdown that held me hostage for 35 days and forced me to juggle paying my mortgage and feeding my kids. Now there is a second shutdown looming. I’m grateful to Senator Gaughran and New York State for putting working class taxpayers first.”