Several school records set in events including the 4x200-meter relay, the 300-meter dash, the triple jump and the long jump. 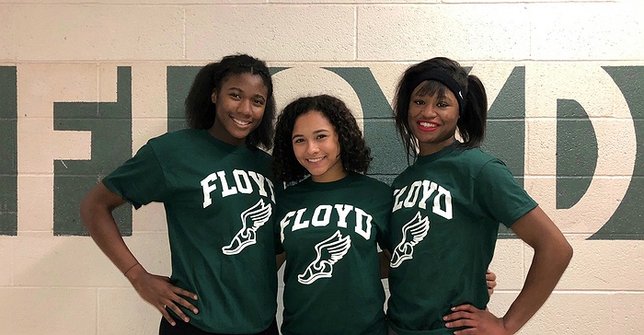 Pictured from left to right are Antoinette Miller, Kaylah Britt and Jade Foster.

Mastic Beach, NY - January 30, 2018 - The William Floyd High School girls winter track team coached by John Ryan continues to roll along this season setting several school records in various events including the 4x200-meter relay, the 300-meter dash, the triple jump and the long jump.
Kaylah Britt set a new school record earlier this season with a 35’ 10” jump, surpassing a 28-year old mark. She has since smashed that record with a 38’4” jump this past Sunday at Ocean Breeze, a performance that qualified her for the New Balance Nationals Championship Division this March. This mark has catapulted her to a No. 1 ranking on Long Island, No. 4 in New York State and No. 20 in the nation.
Additionally, Antoinette Miller ran a 41.36 in the 300-meter dash breaking a 25-year old school record; and Jade Foster’s long jump of 17’ 10.5” broke a 26-year old record.
“The girls are just getting started this indoor season,” said Coach Ryan. “With several meets still remaining including the State Championship meet on March 3, new marks are sure to be established.”