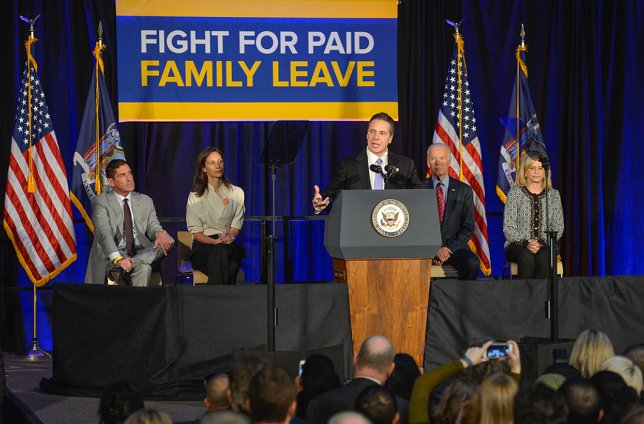 Governor has proposed 12 weeks of job-protected leave for caring for a new child or seriously ill relative -- longest benefits period in the nation.

Albany, NY - January 29, 2016 - Governor Andrew M. Cuomo, joined by Vice President Joseph Biden, today kicked off the “Strong Families, Strong New York” campaign to push for passage of the Governor’s paid family leave proposal in New York State. The Governor has proposed that New York enact a 12 week paid family leave policy – which would be the longest benefits period in the nation for such a policy – to help working families care for a new child or seriously ill relative. The Governor also launched a new website, for New Yorkers to learn more about the need for paid family leave and the benefits of his proposal. In the coming weeks, members of the Governor’s administration will be visiting communities across the state to raise awareness and rally support for the policy.

At today’s launch event at the McBurney YMCA in New York City, the Governor and Vice President were joined by Christy Turlington Burns, founder of Every Mother Counts, along with dozens of federal, state and city elected officials. More than 500 parents, caregivers, workers, community members and advocates were also in attendance to rally support for the proposal.

“There are times in life when family comes first – like when a child is born, a loved one is sick, or a parent is dying – and I believe everyone deserves the right to be there in those times,” said Governor Cuomo. “The lack of paid family leave is a rampant economic injustice that runs against the grain of the American promise. It’s unacceptable that people are still forced to choose between caring for their families and keeping their jobs, and we’re going to change that in New York. We’re going to pass 12 weeks of paid family leave and stand up for what’s really important in life – and I urge all New Yorkers to join us in this fight.”

Governor Cuomo’s proposal would ensure 12 weeks of job-protected, employee-funded leave to be used for caring for a new child or a sick relative. It would also guarantee employees the right to return to their current job upon their return from leave and bring discrimination actions to the extent that their rights are violated. 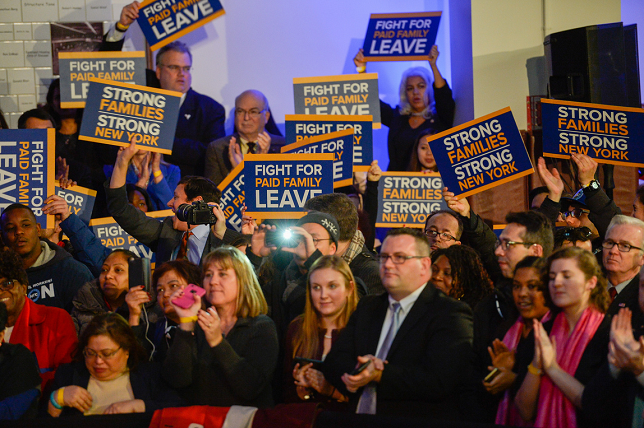 Governor and Vice President joined by more than 500 working parents, caregivers, advocates and others to kick-off event. Photo from Governor Andrew Cuomo, via Flickr.

The Need for Paid Family Leave
Paid family leave is currently offered by every developed nation on the planet – except for the United States. Within the U.S., only California, New Jersey and Rhode Island have such a program, and none offer benefits for longer than six weeks. Additionally, the U.S. Department of Labor has reported that a mere 12 percent of private sector workers are offered paid family leave by their employers.

While the Family Medical Leave Act of 1993 offers 12 weeks of unpaid leave, because of various exemptions approximately 40 percent of American workers are left out. Additionally, even for those who are covered by the FMLA, taking time off to care for a new child or sick relative often means workers are forced to forego wages, use up savings or vacation time, or even risk losing their jobs in order to care for new children or sick relatives.

This injustice is particularly acute for low-income workers. In New York, nearly 50 percent of low-income working mothers have $500 or less in savings, and more than 33 percent have no savings. Without paid family leave, low-income workers are also more likely to utilize public assistance after the birth of a child or serious illness in the family.

In addition to parents with new children, paid family leave is a crucial benefit to families caring for an ailing loved one – especially elderly relatives. More than 90 percent of elderly people receiving care in the community rely on the support and care of their loved ones, either independently or along with paid help – and two-thirds of older Americans receive care solely from their family members. Seventy-eight percent of people who care for elderly relatives are employed, and 62 percent report working full time. Furthermore, with growing life expectancies nationally and an aging population, the need for elder care is expected to increase in the coming years.

Proven Benefits and Support
Governor Cuomo’s proposal for 12 weeks of paid family leave offers a number of broad and important benefits to working families, businesses, and the state’s economy. This includes economic security and better health outcomes for families, greater workforce longevity and productivity for businesses, and a stronger economy for all.