Suffolk County Leg. Rob Trotta attended his 15 Eagle Scout Court of Honor for Troop 75, which recognized its 81st Eagle Scout and at 13 years of age, its youngest. 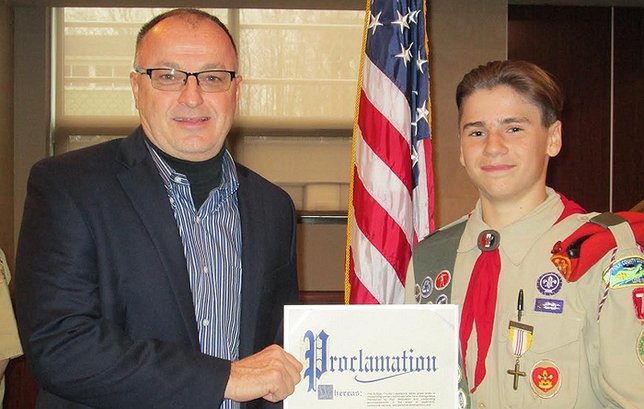 Kings Park, NY - January 24, 2017 - Suffolk County Legislator Rob Trotta attended his 15 Eagle Scout Court of Honor for Troop 75, which recognized its 81st Eagle Scout and at 13 years of age, its youngest, Richard Peter Mangogna. When Richard became a scout, this was his goal and he has accomplished it.

Being very involved in his school and with extracurricular activities, it was only fitting that Richard would do his Community Service Project to enhance the entrance to the Kings Park School District Administration Building and at the same time involve the nursery school children who attend a program at the site.

Richard built four flower boxes and donated a bench and replaced the building’s sign. The flower boxes will be maintained by the nursery school children who will plant seeds and learn how flowers grow.

“To achieve your goal of becoming an Eagle Scout at age 13 is an incredible accomplishment. I am very proud of you and I know that all of Kings Park is proud of you, because it is people like you – who make our community great.”