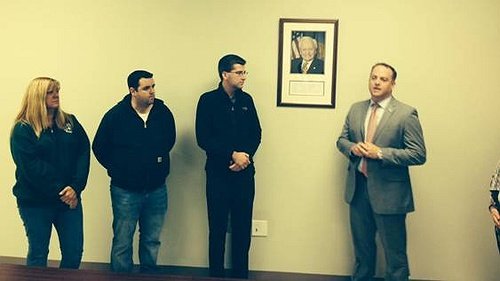 Sayville, NY - November 21st, 2014 - The Community Ambulance Company of Sayville recently named their Education Center in their new headquarters located on Lakeland Avenue after the late Presiding Officer William J. Lindsay. Presiding Officer Lindsay helped pave the way for the Community Ambulance Company to cut through government red tape and helped to secure permits and funding to ensure that they had the necessary resources to serve the communities of Sayville, West Sayville, Bayport, Oakdale and Bohemia.
The “William J. Lindsay Education Center” will be used to train and educate the ambulance company’s personnel on new equipment, lifesaving tactics, and procedures.
“I cannot tell you how honored my family is, and how honored my father would be if he could see this building and the education center named after him,” said Suffolk County Legislator Lindsay III, son of the late Presiding Officer Lindsay.
“My father truly fought for this Ambulance Company and rightly so, because the Community Ambulance Company provides the best care for our residents in need. They deserve this beautiful new building and I know that with new equipment, tools, and an educational center, our neighborhood will continue to have top of the line care from these outstanding first responders.”
Pictured Left to Right: Community Ambulance Company Second Assistant Chief Stephanie Golub, First Assistant Chief James MacDonell, Chief Chris Gonzales, and Legis. Bill Lindsay III in front of a memorial plaque for late Presiding Officer William J. Lindsay in the Education Center named in his honor).