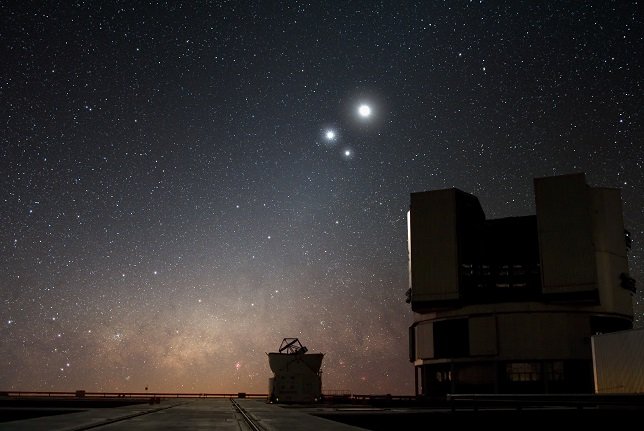 A Celestial Conjunction seen at Paranal in 2009.

Stonybrook, NY - Jan. 22, 2016 - People interested in celestial phenomena will find their hands full for the next month or so, as a fascinating event – one that only occurs once ever decade or two – will be unfolding in the skies over Long Island.

From now until approximately February 20, the pre-dawn sky will be a showcase for five planets of our solar system – Mercury, Venus, Mars, Saturn, and Jupiter – which will actually be visible to any casual observer, according to Stony Brook University Astronomy Professor Fredrick Walter.

“This is a conjunction of planets that you can all see with the naked eye, all five of them,” he said. “The planets all orbit the Sun in a flat plane, as does the Earth; hence, the planets all seem to move across the sky in a line known as the ecliptic. The planets all move along the ecliptic at different rates, and sometimes, in rare instances, they end up on the same side of our sky.”

Professor Walter has been teaching at Stony Brook since 1989; he notes that he’s been interested in Astronomy as far back as he can remember, starting with an early fascination with the United States space program as a child.

“I grew up in the 1960’s, and I remember listening on the radio about the Mercury astronauts and things like that… I had wanted to be an astronaut, but I suppose everybody wants to be one at some point,” he said. “When I got older, I got an undergraduate degree in Physics and a PhD in Astronomy, and then became a teacher…it was a lot of fun, so I kept on doing it.”

Walter explained that the reason for the rarity of this current conjunction of planets is due to the radically different orbits of all the planets involved.

“They are all different distances from the sun and they’re all moving around the sun at different velocities… Saturn is the slowest, but they all get faster the closer they’re moving towards the sun,” he said. “So, in order for them to be in the same part of the sky, they’ve all got to catch up with one another. It takes 10-20 years for all of their orbits to synchronize in such a way that they’re all visible at once…that’s why it’s a rare phenomenon.”

As for actually viewing the event, Walter noted the main time to see it is right before dawn, with the planet Mercury being the most difficult to spot due to its proximity to the sun; the rest of the planets, he said, are fairly easy to spot, particularly Mars by its distinct redness.

“You’ll want to look maybe an hour, or a half-hour before sunrise…the early morning. It’s cold, it’s dark, but that’s when you can see the planets,” he said. “There are no planets visible in the evening sky right now…they’re all in the morning sky. It’s just the current alignments and where they are, but next year that will change…then, they will be in the evening sky.”

In order to spot the planets within the conjunction Walter notes viewers must wait until Mercury comes over the horizon, given that it is the most difficult to see; binoculars can help in this instance, he said, although it’s still perfectly visible to the naked eye.

In addition, for your viewing pleasure, Walter suggests an occasional road trip upstate for optimal sky conditions, although stargazing can still be quite effective even in your own suburban backyard.

“The best thing you can do to see the sly is to go to a dark place…get off of Long Island, get away from New York City, so up to the Catskill or the Adirondack mountains, and you’ll be astounded at the number of stars you can see,” he said. “However, you can still see the conjunction just fine from Long Island as well… you just need a clear horizon and clear skies. It’ll look the same from basically anywhere, but the difference is that upstate you can see thousands of stars as well, whereas on Long Island on a good night usually only a hundred or so are visible.”

While this conjunction of planets will surely make for an impressive sight, Walter noted that – for those will a bit of patience – an even more breathtaking display of planets will be taking place just a wee bit further into the future.

“This isn’t a particularly great conjunction as far as they go… yes, all five planets are visible, but they’re all separated by 120 degrees, so they’re spread out over a third of the sky,” he said. “If you wait until September of 2040, all five naked eye planets will all be within eight degrees of each other. But regardless, this current conjunction is still quite spectacular.”

For Astronomy buffs, Walter said that this isn’t the end of the fun; meteor showers tend to be visible several times every year, and an amazing solar eclipse is due to hit in August of 2017.

“There’s always something happening in the sky,” he said.