Last weekend, they put forth an outstanding performance at the Archbishop Molloy Stanner Games in Manhattan. 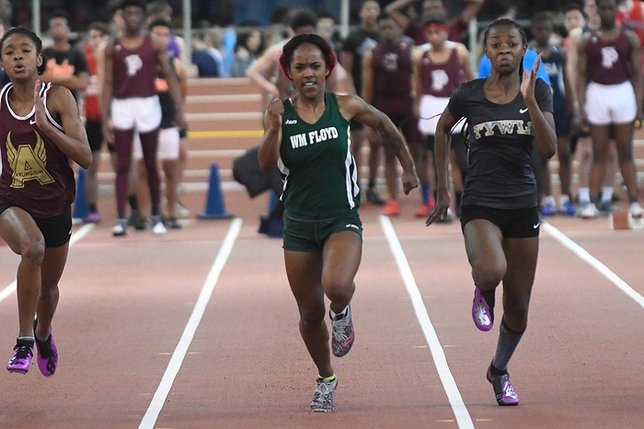 Tatianna Kistner in the 55-meter dash.

Mastic Beach, NY - January 18, 2019 - The William Floyd Colonials girls’ varsity track team under the tutelage of head coach John Ryan is following up last year’s tremendous season with another fantastic season, completing times in various events that are among the very best in Suffolk County and New York.
Last weekend, they put forth an outstanding performance at the Archbishop Molloy Stanner Games in Manhattan. Highlights include Tatianna Kistner earning the overall meet champion crown in the 55-meter dash. Her previous time of 7.42 seconds in the 55-meter dash currently has her ranked 23rd in the entire country among sophomores.
Kaylah Britt, this season’s No. 1 ranked triple jumper in Suffolk County recorded a season-best jump of 38’, which currently ranks her as No. 7 in all of New York State. In the preseason, Britt was named among Newsday’s “Top 25 Girls Indoor Track Athletes to Watch” for 2018-19. She is looking to repeat this year as an All-State performer.
The 4x200-meter relay team of Jordan Widecki, Kylasia Bullard, Kaylah Britt, and Tatianna Kistner, set a season best of of 1:46.57, currently the top time in all of Suffolk County, breaking their previous top time of 1:47.61, which was good enough for the fifth-fastest time among all public high school 4x200 teams in the New York State.
Alaysia Cobb, Courtney Muchow, and Alanis Gonzalez all ran personal best times in their events. Also on the mid-distance side of the track, Courtney Muchow is training to compete in the state qualifier meet in the 1,000 meter run or 1,500 meter run.
The championship events are getting closer as the girls’ varsity track team continues to put in the hard work as they aim to achieve their goal of once again being among the top performers in the county and the state. Go Colonials!