Nassau County is attempting to raise public awareness regarding youth trafficking and the commercial exploitation of youths. 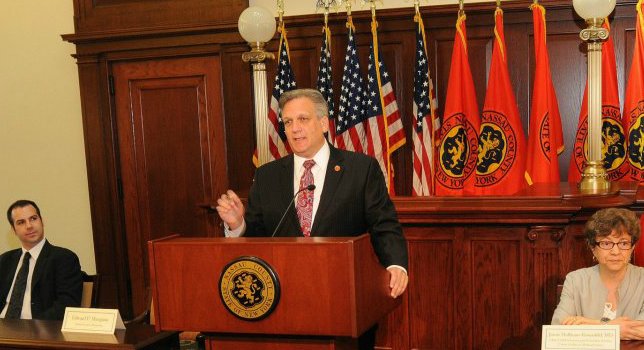 Nassau County Executive Edward P. Mangano announced today that the county is raising public awareness regarding youth trafficking and the commercial exploitation of youths via the Safe Harbour Project.

Nassau County, NY - Jan. 11, 2016 - Nassau County Executive Edward P. Mangano announced today that Children’s Protective Services (CPS), a division of the Nassau County Department of Social Services (DSS), in partnership with the Department of Human Services, Office of Youth Services, the District Attorney, Police Department, Probation Department, The Safe Center LI and Family and Children’s Association, are raising public awareness regarding youth trafficking and the commercial exploitation of youths, via the Safe Harbour Project.
County Executive Mangano stated, “Nassau County is dedicated to addressing the service needs of children at-risk of, or victims of, sex trafficking and commercial sexual exploitation. Together, we are eradicating trafficking and exploitation of youth while assisting victims with the Safe Harbour Project.”
Through a 2016 grant from the New York State Office of Children and Family Services (OCFS), Nassau County DSS was awarded an additional $136,500 for a Safe Harbour program designed to address trafficked and commercially exploited youths. Nassau County’s Safe Harbour Project is a County-wide, coordinated, multi-system, long-term strategy to enhance the identification, protection and service delivery for children who are victims of human trafficking and commercial sexual exploitation, and to provide services to best meet their individual needs. Since June 2014, there have been 126 children in Nassau County who have been identified as possible victims of human trafficking. Services such as counseling and housing have been provided.
It is estimated that over 100,000 children in the United States are at risk of being trafficked for commercial sex each year. While youths in any community can become a victim of trafficking and exploitation, certain youths are at greater risk. Youths at-risk often have unstable family situations and have little or no social supports. Runway and homeless youths, children involved with child protective services and foster care, as well as Lesbian Gay Bisexual Transgender (LGBT) youths are also at increased risk for exploitation and trafficking.
DSS Commissioner John E. Imhof said, “As evidenced in County Executive Mangano’s commitment to raising public awareness regarding family violence, he is equally passionate about making the public aware of youths who are victims of trafficking. We need to continue to raise awareness in all communities.”
The dome of the Theodore Roosevelt Executive and Legislative Building will be illuminated in blue the week of January 18th, in honor of Human Trafficking Awareness Month.
If you know a child who may be in danger, call The Safe Center at (516) 542-0404. In situations involving imminent danger, dial 911. For more information, please send an email.