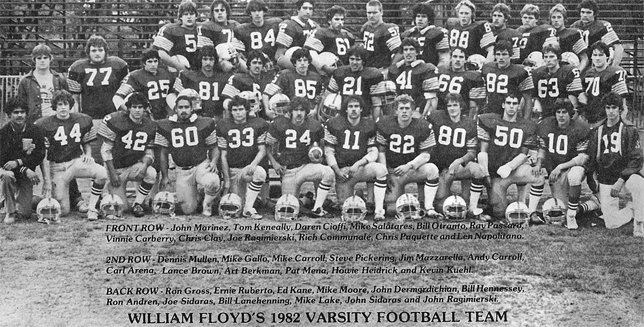 Mastic Beach, NY - January 9, 2017 - This Saturday, January 13 at 12 pm in the William Floyd High School senior cafeteria, the William Floyd School District in collaboration with the William Floyd Alumni Association will induct its 11th class of honorees into the William Floyd Athletic Hall of Fame, an honor reserved for those who have distinguished themselves in relation to William Floyd athletics. This year’s list of inductees includes five individual athletes, a coaching award recipient and the 1982 varsity football team, the first in team history to earn a trip to the playoffs.
In addition to the 1982 varsity football team, the team’s head coach Nick Schroeder has been selected as the Coach’s Award recipient for his efforts in turning around the program and leading the Colonials to the playoffs for this first time ever after several subpar seasons. Coach Schroeder spearheaded the turnaround, along with assistant coaches Martin Ferris, Al Schroeder and Lou Schiavetta, when he took over in 1981 and the team posted a 4-4 record after a winless 1980 season. He coached the Colonials until 1985 before taking over as athletic director in 1986.
The outstanding individual athletes garnering enshrinement into the Hall of Fame are John Liselli (1981), an All-League baseball player who lettered in four varsity sports (baseball, basketball, football and soccer; Peter Agelis (1990), former All-League captain of the soccer team, who, at that time, led the Colonials back to the playoffs for the first time in more than a decade; Robert Feise (1995), former standout on the wrestling mat and the football field who earned selections as All-League (football and wrestling), All-County (football and wrestling), All-Long Island (football) and All-State Second Team in football. He was also the first student-athlete from William Floyd to earn the Collotta Award for the “Most Outstanding Linebacker” in Suffolk County; Jacquelyn Ardolino (2009), a six-year varsity starter for the varsity lacrosse team who amassed 369 goals during her high school career. She was also a four-year captain and five-time member of the All-County lacrosse team; and Octavia (Williams) Richardson, a three-year starter for the varsity lacrosse team who was a three-time All-County selection and a member of the 2011 Newsday All-Long Island team.
“This year’s class of honorees – like all who have gone before them – truly embody the spirit of William Floyd – excellence, pride, determination, sportsmanship and class,” said Kevin M. Coster, Superintendent of Schools, William Floyd School District. “I congratulate them on this tremendous honor.”
This year’s class joins the ranks of fellow Hall of Fame athletes, individuals and teams including 63 individual athletes, five coaches, six community award recipients, the “Floyd Fanatic” and 10 championship teams, including the 1962 baseball team, the 1969 boys cross country team, the 1972 boys cross country team, the 1981-82 girls basketball team, the 1986 girls cross country team, the 1987 bowling team, the 1991 softball team, the 1994 boys basketball team, the 2001 football team and the 2002 wrestling team.
“The William Floyd Alumni Association is honored to recognize such a wonderful group of inductees for the 11th annual William Floyd Athletic Hall of Fame,” said Jackie (Intonato) Eglevsky (1964), President, William Floyd Alumni Association. “Their accomplishments continue to bring great pride to the William Floyd community.”
To be considered for the individual honor, nominees must be graduates of William Floyd High School and have exhibited both excellence and sportsmanship during their time as a William Floyd student athlete. The annual Hall of Fame induction ceremony, sponsored by the William Floyd Alumni Association, is designed to recognize former outstanding athletes and role models of the past while strengthening the bonds between the community, the district and its alumni.
The ceremony will take place in the William Floyd High School senior cafeteria at 12 pm on Saturday, January 13, 2018. The cost to attend the luncheon is $35 per person, children six to 12 cost $17 and children under six are free. Tickets are available at the door and can also be purchased online here.
About the William Floyd Alumni Association
The William Floyd Alumni Association, now in its 10th year, continues to make a positive difference in the lives of many. The organization contributes to many outreaches including awarding more than $11,000 in scholarships to graduating seniors; more than $11,000 in kindergarten supplies for incoming students; more than $11,000 in Career and Technical Education awards for high school students; the creation of the Armed Forces Memorial to honor alumni who made the ultimate sacrifice; STEM (science, technology, engineering and mathematics) initiatives for middle school students and so much more. In addition to the Athletic Hall of Fame, the William Floyd Alumni Association hosts two other events – Distinguished Alumni and Outstanding Educators – which helps inspire current students, recognize those who have come before and continue to keep the connection between past and present strong.