Senator Schumer announced that the United States Air Force Thunderbird squadron will be performing at the 10th anniversary of the Bethpage Air Show this Memorial Day.

The Thunderbirds will be flying over Long Island again this Memorial Day. 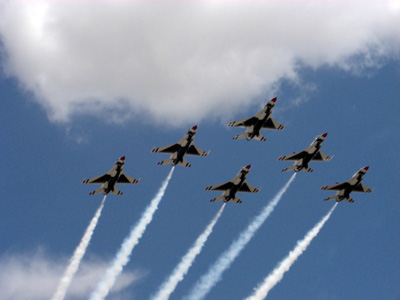 The Thunderbirds, also known as America’s Ambassadors in Blue, alternate each year with the Blue Angels, who performed last year.
“The Air Show is one of the great events on Long Island and, now more than ever, the Thunderbirds needed to be a part of this celebration.
This will also be the first major event at Jones Beach since Superstorm Sandy caused serious damage to the park, which is the most popular and heavily visited beach on the East Coast with 6 million visitors annually.  Much of the damage was sustained at the Nikon at Jones Beach Theater, which experience flooding halfway up the main orchestra section.  The iconic 2-mile boardwalk was heaved up in sections, and at Field 6 the beach completely eroded back to the boardwalk.
The air show attracts approximately 350,000 visitors to the park annually.  In 2011, the Thunderbirds, who were performing overseas in Turkey, did not participate in the Air Show, and visitor turnout plummeted by over 100,000.  The 2012 show, featuring the Blue Angels and the World War II-era bombers, was attended by over 384,000 spectators.
Schumer wrote to Michael Donley, the Secretary of the U.S. Air Force, requesting that the Thunderbird squadron attend this year as they are sure to attract a large audience that will help generate much needed revenue for the park and local economy.
“This will be the first major event since the region experienced the damage and suffering from Hurricane Sandy. Therefore, the Air Show will lift the community’s spirit and be a great start of the summer season,” Schumer wrote.
Share your thoughts on this article by posting a comment below or by visiting our Long Island Living discussion forum.