The Long Island Rail Road experienced major delays and suspensions due to last night’s nor’easter, which brought between 4 and 8 inches of snow to the area.  On Thursday, the LIRR returned to it’s modified schedule with 10 of its 11 (all except the Long Beach line) branches operating to and from the city. 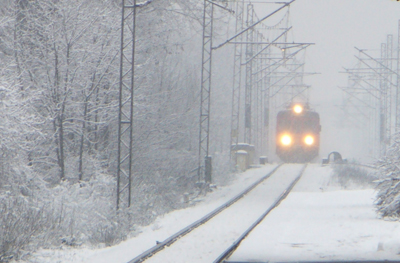 Some commuters reported delays of up to five hours last night, and the cold wind and wet snow forced suspensions twice late-Wednesday. A system-wide suspension was ordered at 6:30 p.m. due to inclement weather and icy conditions, and only limited service out of Penn Station was available at 8 p.m., and again around 9 p.m. with service to Penn Station re-opening briefly around 8:20 p.m.
The cause of the suspension were signal failures spread out throughout the system.  Trains heading Westbound were redirected, and riders were informed that they could exit the train at the next scheduled stop, or remain onboard as the train headed back east.
Downed trees and power lines cause prevented operation along the Babylon, Port Washington and Far Rockaway lines, and customers were advised to reach their destinations by taking the Ronkonkoma and Huntington lines and arranging a pick-up.  LIRR crews worked through the night to clear the tracks.
LIRR accommodated riders on the Long Branch line by providing bus service between Lynbrook and Island Park.  Long Branch remains the only line without any service, and LIRR crews are still making repairs following Hurricane Sandy.
Delays this morning ranged from 15 to 20 minutes according to LIRR officials, who say that trains are operating at reduced speeds due to slippery track conditions.
LIRR is continuing to waive on-board purchase fees and is charging off-peak rates, but asks riders to consider staggering work hours and to avoid travelling at regular peak times.  Riders are advised to monitor status updates throughout the day.
Share your thoughts on this article by posting a comment below or visiting our Long Island Living discussion forum.