The Scene at St. Gertrude's

The gymnasium at St. Gertrude the Great Roman Catholic Church in Far Rockaway has been taken over by the Occupy Sandy movement, which is using their grassroots-style community organizing to help local residents return to ...

St. Gertrude the Great Roman Catholic Church on Beach 38th Street in Far Rockaway is the main delivery hub of Occupy Sandy’s relief effort in the Rockaways.  While much of Long Island, with the exception of exchanging great tales of power outages and long gas lines, has returned to normal, out here in the Rockaways, where residents are approaching 21 days without power following unprecedented flooding, there is still have a long road to normalcy. 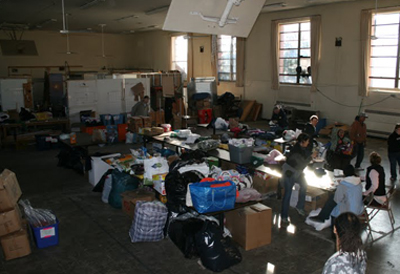 And that is where the Occupiers come into play.  Setting up shop in the gymnasium at St. Gertrude’s, these former Wall Street activists have shifted their attention and efforts to providing residents with essential supplies.  The need for such supplies is evidenced as boxes of personal hygiene and home cleaning supplies, just unloaded from the back of a truck, is emptied within a minute into the handbags and push carts of residents waiting on line.
Greg Horwitch, the chief organizer, easily recognizable by his bright yellow hard hat, and his name written on duct tape slapped across the chest, is constantly in and out the door, marking down major deliveries on his clipboard.  A mishmosh of deliveries from near and far have been arriving around the clock at this major distribution hub. 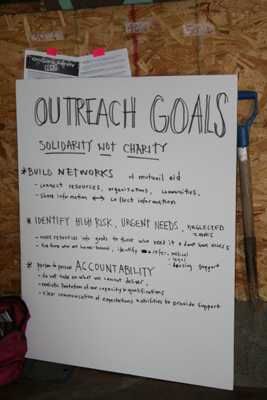 Occupy Sandy has three major goals.  Their first goal is to efficiently distribute the goods and food being collected to the community.  Secondly, their outreach team assesses the acute needs of community members, including the homebound and the elderly who require home deliveries.  The final goal is to manage the space at St. Gertrude’s as a staging area in order to distribute the various goods to smaller volunteer sites in Far Rockaway.
The new occupy movement originally set-up at Beach 113th Street, but as locations opened up, the volunteers spread out.  The central location and space available within St. Gertrude’s makes it an ideal staging ground for the Occupiers, who have pushed the chairs and desks, once filling the gym floor but are now crusted with dried sand and salt water, into stacks in the corner.
There are anywhere from five to ten volunteer-run distribution sites in the Rockaways, but they are extremely fluid, one site closing down, two new sites opening.  “We get calls daily, ‘Today’s our last day, bring what you have.’ So, we have people on the ground, building networks, seeing where there is a need,” Horwitch, a resident of Sunnyside, Queens, explained as he quickly noted down the content and volume of a major delivery of warm meals prepared by Chef Moir and his students at the Perth Amboy Vocational and Technical Institute. 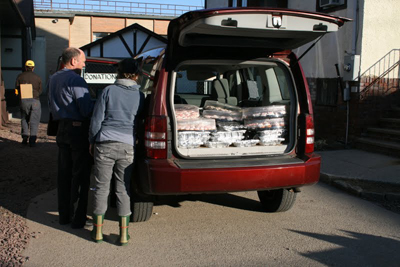 There is no exact science to the work the Occupiers are doing, but there is also no group better to effectuate this work that those already accustomed to grassroots-style movements. The initial organizers at St. Gertrude’s were Occupy Wall Streeters, but new volunteers, people who were never part of the financial reform protest, add to the relief effort on a regular basis.  Unlike their presence at Zucotti Park, the residents of the Rockaways are in no rush to see the occupiers leave, at least not until real normalcy has set in.
“We are continually establishing contact, and we will be here as long as there is a need,” Horwitch said, before rushing off to prepare for the next major delivery.
Share your thoughts on this article by posting a comment below, or by visiting our Long Island Living discussion forum.