DA Sini announced the Conviction of (left) Frank Alexander of Queens, 49, for a 2017 robbery. His accomplice, Sykim Johnson of Queens, 35 (right), had previously pleaded guilty.

Riverhead, NY - October 22, 2018 - Suffolk County District Attorney Timothy D. Sini today announced the trial conviction of a man for robbing GEM Pawnbrokers, located at 708 Walt Whitman Road, with an accomplice at gunpoint in 2017.
“Despite their best efforts to disguise themselves, these two defendants are now both going to have to trade in their costumes for prison jumpsuits,” District Attorney Sini said. “Assistant District Attorney Sheetal Shetty worked tirelessly with our law enforcement partners, including the Suffolk County Police Department and Medical Examiner’s Office, to investigate this case and bring the perpetrators to justice.”
Frank Alexander, 49, of Queens, was found guilty by a jury yesterday of Robbery in the First Degree, a B felony, and Robbery in the Second Degree, a C felony.
His co-defendant, Sykim Johnson, 35, of Queens, pleaded guilty on July 12 to Robbery in the First Degree and Robbery in the Second Degree. 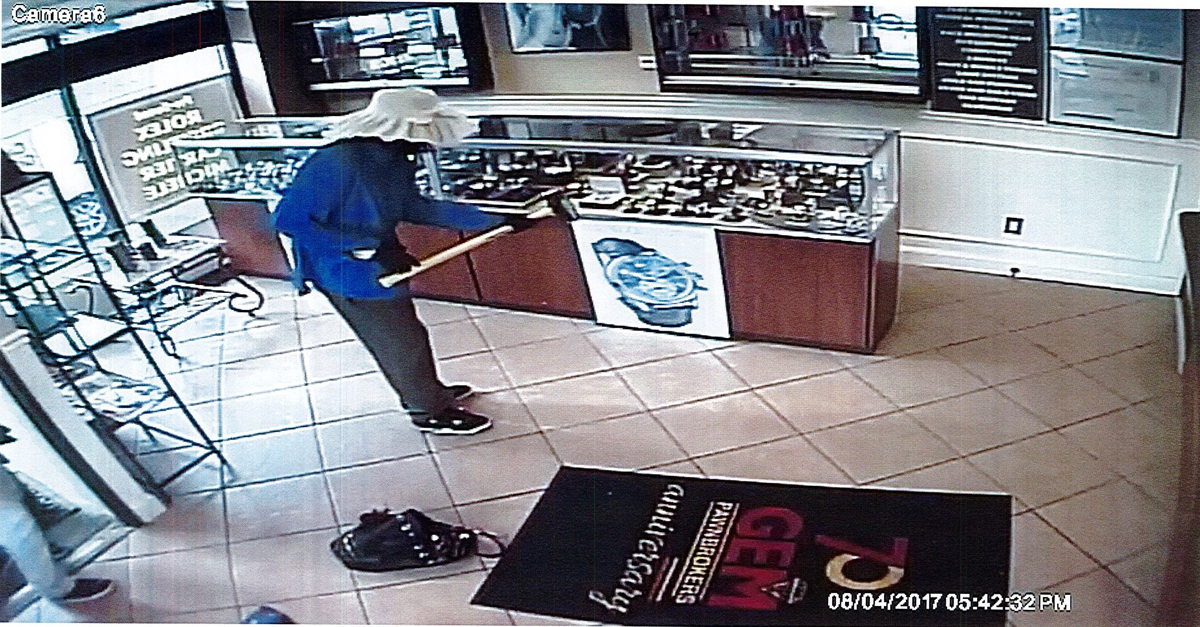 Surveillance video still from the 2017 robbery. Photo Credit: SCPD
On August 4, 2017 at approximately 5:42 p.m., Alexander and Johnson entered the store while disguised in makeup and women’s clothing, including large hats, long black wigs, raincoats and gloves. Alexander held the cashier at gunpoint while Johnson used a sledgehammer to shatter a jewelry case in the store containing designer watches.
The defendants fled the store with approximately $72,000 worth of watches.
A civilian observed the pair fleeing the scene of the robbery in a vehicle. The civilian, who became suspicious upon observing their disguises and the sledgehammer, took a photo of the vehicle’s license plate and contacted the Suffolk County Police Department.
Police located the vehicle in a driveway at a residence in Westbury, where the defendants had abandoned it.
A search warrant for the vehicle was obtained by the District Attorney’s Office. The Suffolk County Medical Examiner’s Crime Laboratory Section conducted a forensic analysis of DNA evidence recovered in the vehicle and at the pawn shop, including blood and DNA found on one of the defendants’ wigs, which revealed matches to Alexander and Johnson.
The investigation was conducted with additional assistance from the Nassau County Police Department and the New York City Police Department.
Johnson was arrested on December 27, 2017, and Alexander was arrested on January 18, 2018.
Alexander’s trial began on September 18. The jury deliberated for one day before returning a verdict of guilty on both counts of the indictment.
Alexander faces a maximum sentence of 25 years in prison. He is scheduled to be sentenced in front of Suffolk County Supreme Court Justice William J. Condon on December 3.
Johnson is scheduled to be sentenced on October 29 in front of Suffolk County Supreme Court Justice Mark Cohen.
This case is being prosecuted by Assistant District Attorney Sheetal Shetty, of the Major Crime Bureau.