Terror at the HV Asylum: A Guide Through Coram’s Ghostly Woodlands

The HV asylum provides a perfect fusion of haunted house and spooky trail, sure to scare all comers both indoors and out. 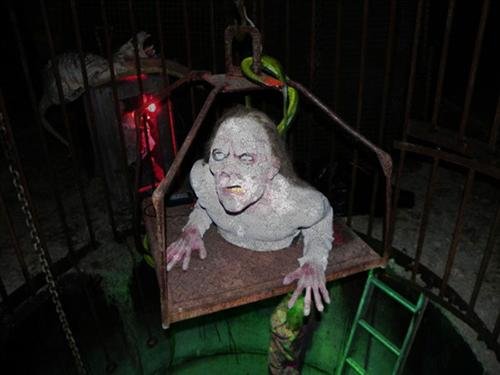 Only a couple weekends remain in October, which means that as the Halloween spirit grabs hold of Long Island there is precious little time left take on the best scares of the season. With that in mind, I recently took the opportunity to bring a brave troop of friends to tour the HV Asylum, one of this year’s scariest local happenings.

The HV Asylum is one of the largest haunted attractions on the Island, spanning roughly 13 acres of land at High Velocity Paintball in Coram. For the last four years the owners of High Velocity have been partnering with local haunters to put together a unique blend of both haunted houses and an outdoor spook trail (it was actually this writer’s first outdoor haunt, and one I truly wish to experience again).

Upon arrival your party will be let into a waiting area complete with iridescently lit picnic tables and a concession stand—this could provide a real reprieve from more traditional single file lines on busy nights, though the staff does a good job of putting a new group through every five minutes or so. Once your party gets to take its turn, a robed tour guide will greet you at the entrance gate; ours was rather quiet at first, but spoke with a shocking intensity when warning us of what lay ahead. He was, however, kind enough to give us fair warning of where to expect strobe lights (it is often difficult for an actor to break character, that this one had the professionalism to take a pause to address our minor medical concern was greatly appreciated).

On the other side of the gate lies an abandoned “Western” town. Many of the structures here are likely part of the paintball arena, but on a foggy night (and you can expect there to be plenty of fog) lit only by the moon and a charonic guide’s lantern, their vacant, bombed-out appearance contributes heavily to the eerie atmosphere of the trail.

Gradually, an influx of murderous men, frightening monsters, and gruesome goblins will begin to skulk out from the shadows. As with any haunt, some of these creatures will inevitably be more imposing than others—it was the sneaky, well-disguised goblins that knocked me off my toes more than a few times.

The winding wooded trail provides a different, though no less terrifying experience from more traditional indoor haunts, but it eventually does give way to two different sinister buildings. The first is relatively brief, giving victims a taste of what waits ahead before sending them back into the open air where yet more fiends lurk.

Eventually your party will find the namesake Asylum, where a rambunctious man will cautiously welcome you into this final and most densely packed collection of horrors. Here the thrills will jump out at breakneck speeds, providing some of the best scares of the night as well as a few unique sights which, at the very least, my party had never encountered before.

HV Asylum’s entire haunt is well crafted, and it makes fantastic use of the wooded paintball-christened land on which it stands, but some of its greatest highlights wait in the mineshaft and asylum constructed specifically for the attraction itself. Detailed props and intricate animatronics set a scary tone throughout the walk, though the actors will likely be the most startling aspect of your visit. To that end, HV employs a balanced approach to it scare tactics, using both stealthy, silent ghouls who will appear when least expected and more intense, bellowing monstrosities who will have their prey running for dear life as they give chase, thus catering to all kinds of haunt enthusiasts. No matter how you prefer to be scared out of your wits, HV Asylum is sure to have a beast which will enthrall and terrorize you.

For more info on the HV Asylum including hours, pricing, and location, click here!

This review was made possible by our partners at LIHauntedHouses.com!