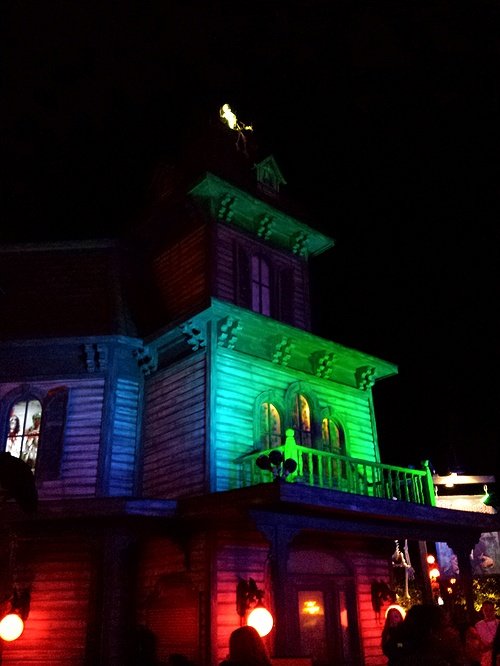 Driving down Bayville Avenue it is truly impossible to miss the distinctive Bayville ScreamPark. The amusement park is located right across from Ransom Beach and the Long Island Sound. It is also, conveniently, within close proximity to some super savory smelling restaurants. As you make your way over to the park entrance, with the comforting savory smells filling your senses, you’ll begin to see the glow of an eerie green light spilling over the dark building tops, emanating from a dense fog.

During the rest of the year Bayville Adventure Park is your typical fun, family-friendly amusement park. Visitors get to partake in such activities as miniature golfing, rock climbing, bumper boats, and other wholesome activities. But now, Bayville has been transformed into a terrifyingly terrific Halloween town.

As you enter the park you begin to see a handful of horrifying haunted attractions lining the walkways. You see cart vendors, stationed around the park selling novelties like giant Jell-O filled syringes and glow sticks. You encounter hanging skeletons and telling building facades depicting what each haunted attraction theme is.

If 1 of the 5 haunted happenings had to be picked as the main attraction, it would have to be Bloodworth Haunted Mansion. Be sure to look up into the windows, before going into the mansion, at the moving screens projecting video of different monsters and people, dripping blood and reaching out menacingly to get you.

This is just a preview of what you’ll experience while actually making your way through the many roomed haunted mansion. Don’t say that they didn’t warn you!

The amount of detail that went into the mansion is astounding. I know it may be difficult to keep your eyes open with the threat of impending danger and people jumping out at you around every corner so imminent but really try to do so. Each room is elaborately decorated, large surprising animatronics pop out from unexpected places, and the actors camouflage themselves exceptionally well with the scenery. Don’t trust anything and don’t forget to mind your head! There are already quite a few dangling from the ceiling.

A truly unique attraction at Bayville ScreamPark is Uncle Needle’s Funhouse of Fear in 3D. Once you walk through the clown mouth threshold you are given 3D glasses and told to use your hands, not your head, to find your way through the mirror walled funhouse. Seems easy enough right? Wrong. The 3D glasses, misleading mirrors, bright neon paint and glow in the dark walls give the funhouse incredible depth. You must literally feel around, pressing on the mirrors, to try and find your way out.

In the spirit of not giving away all of the tricks and treats you will encounter at Bayville let just say that the last 3 haunted attractions don’t get any easier or less frightening. The Curse of the Zombie Pirates casts a foggy outlook, with some scream inducing characters, over the once wholesome pirate themed mini-golf course.

Temple of Terror is a dark, seemingly endless labyrinth. You’ll be clinging onto the person in front of you for dear life while attempting to escape from the things that go bump in the night. Or should I say, in the temple.

You’ll want to have a good pair of sneakers on as you walk through the Evil in the Woods trail. Watch your step and stay on alert, there are crawlers.

At one point during night, after the venture into the haunts, the infamous song Thriller by Michael Jackson came on the loud speaker. Then as if a gate somewhere had been instantly opened, people in costume began to file out of an alleyway and into the park. One girl who hadn’t yet noticed the appearance of these scary costumed folk started dancing the Thriller dance only to be immediately joined by one of the actors, who started doing it with her in unison. It was quite the quirky, surprising sight to see, and a very welcome one for such a creepy place.

Bayville ScreamPark is a haunt you really don’t want to miss out on this Halloween season. There are multiple haunted attractions and entertainment throughout the park, outside of the attractions themselves.

One last thing good thing to note about Bayville ScreamPark is that it is also open during the week. Not all haunts are open during the week, many only take place over the weekend. If you’d like to avoid long lines and congestion in the haunts I’d suggest going on a week night if at all possible. Also, there is some nudity depicted in Evil in the Woods and a good amount of gore in Bloodworth Mansion, both of which may not be appropriate for young children.

Would you like to find out more about this haunt and other haunted attractions around Long Island? Then check out our 2014 Haunted House Reviews!