Bad Year for Apples and Grapes

Unusual weather has had a severe impact on the nation's grape and apple production this year.

The U.S. Department of Agriculture predicts apple and grape harvests across the nation this year will yield substantially less than in the past, crippling the wine and apple industries.

When it comes to wine production the difference of a few degrees can spell destruction.  Oregon wine producers, which have built a market centered on the Pinot Noir grape, have noticed an increase in alcohol content in their product over the past two decades, resulting from higher sugar contents in sunnier years.  Vineyard owners are shifting their crops to north-facing hillsides in an attempt to give foliage more time to develop and shade grapes from the sun.
Pinot Noir thrives in mild, even chilly temperatures where the air is heavy with ocean air.  While growers can adjust their techniques in order to deal with gradual temperatures increases, it’s nearly impossible to account for weather extremes.  Late-fall rain can cause the grapes to rot on the vine, and just as easily excessive sun can damage the delicate fruits. 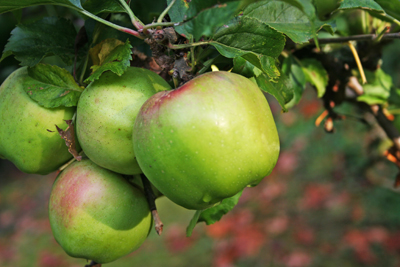 Similarly, recent weather trends have been hard on apple growers in the north and east.  A warm late winter and early spring caused apple trees to blossom in Michigan, the nation’s third largest apple-producer.  But an overnight freeze in late-April decimated the harvest.  Growers burned hay to raise the temperatures within their orchards that night, but there was no way to beat the freeze.  Now, pickers have left the state to find work in other areas, and the farmers are bracing for a tough winter without the income of their storage apples.  Many growers fortunate enough to have a stock are still forced to eliminate pick-your-own options this season.
The U.S. Department of Agriculture predicted in August that New York’s apple harvest will be the smallest since 1948, all due to adverse weather.  The agency reports that New York’s apple production has dropped 52 percent, grapes by 39 percent, peaches by 60 percent and pears by 79 percent.  Its the worst year for grapes since 1977, but this year is expected to hold the record for lowest peach and pear production in the state.
The apple industry in New York has an economic impact of about $233 million dollars, making New York the nation’s second largest apple producer.  Three state legislators are proposing a bill to support apple growers during this season with a tax credit for small farming families, allowing them to claim 35 percent of crop losses.  Despite the dismal reports, Long Island pick-your-own orchards are prepared for the seasonal flood of apple pickers.
Share your thoughts on this article by posting a comment below or visiting our Long Island Living discussion forum.