Family Has Resided in Bellport Community Since 1865. 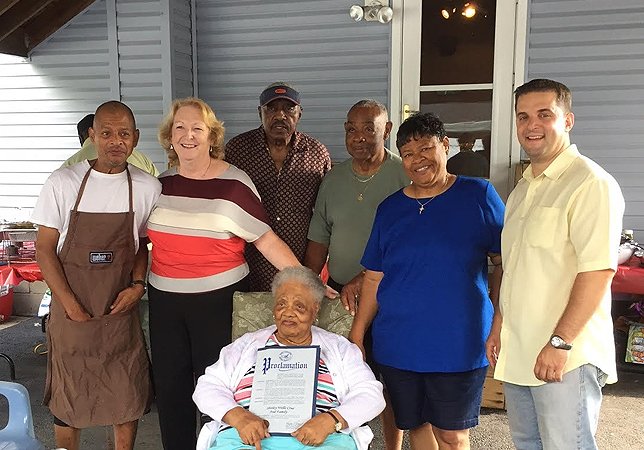 Bellport, NY - August 29, 2017 - Sarah Smith was born in 1865 into one of the first black-native American families in Bellport, NY. She married Charles Travalee and they had eight children together. One of them was Elga Travalee, who married Samuel Wells and had eleven children who all grew up in Bellport; Stanley, Dennis, Dorson, Loretta, Alberta, Shirley, Thomas, Charles, Bernard, Douglas and Joseph. Legislator Kate Browning (WF-Shirley) and her Chief of Staff Josh Slaughter, attended the Wells-Cruz family reunion on Saturday, August 26, 2017, and presented a proclamation to the family recognizing their rich history and contributions to the Bellport community.
Shirley Wells Cruz has lived in Bellport for 85 years. She was an active resident and a dedicated nurse working at the Suffolk County Infirmary in Yaphank for over 30 years. Shirley raised two children; Rita and Charles, and she is the matriarch of the entire family including several generations with many grandchildren, great- grandchildren and great-great- grandchildren. The family is still active and very dedicated to the Bellport community.
“The Wells-Cruz family is a staple of Bellport having lived in the community for over 150 years,” stated Legislator Browning. “Shirley and her daughter Rita both worked for decades at our County infirmary and nursing home. They care deeply about helping others and being active members of their community. Strong family values are the bedrock of thriving communities, and the Wells-Cruz family personifies this more than any family in the third district. It was an honor to recognize them for all they have done to make Bellport an amazing place to live and raise a family.”