25 Years Ago: The Sunrise Highway Fires 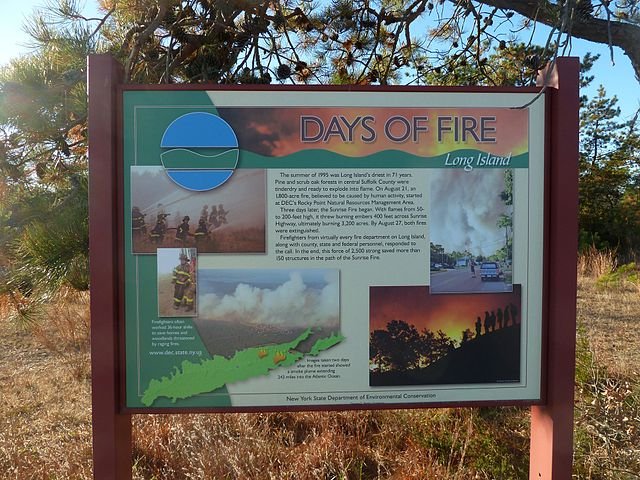 The summer was dry. Good for beachgoers. Not good for the thousands of acres that burned in August 1995 after 19 days without a drop of rain.

Twenty-five years ago, an historic fire spread across the pine barrens, threatening homes and lives as it leaped to the sky, racing through Westhampton, Westhampton Beach and Speonk. Just days before that a few thousand acres had burned in Rocky Point.

Firefighters were not going to get a break.

Reports at the time say more than 2,000 volunteer firefighters from 174 local fire departments from Suffolk and Nassau counties banded together in a heroic effort to encircle and then extinguish the fire. They did the job, heeding the call to battle one of the worst fires in New York State history.

Hundreds of people were displaced, about a dozen homes destroyed along with a few businesses and the LIRR suspended service through the area.

“You could smell and taste the burning in the air. It was a massive wildfire,” recalled Brookhaven Town Supervisor Ed Romaine in an interview 20 years later on CBS.

The fire that started in late August flared until September.

Drivers were met with the evidential desolation of the burned trees and brush, the smoky smell for miles along Sunrise Highway after the fire was put out.

Luckily, no one died in the fires.

In 2015, The Long Island Pine Barrens Society marked the 20th anniversary of the fires on Facebook noting that nearly 7,000 acres burned in the fire.

“The first of two major fires started on August 21, 1995 in the Rocky Point State Pine Barrens Preserve and just a few days later, on August 24th, another fire started in the Northampton-Westhampton area,” the post reported.

These fires, the organization said, were nicknamed the “Sunrise Fires” because flames reached high enough to jump over Sunrise Highway.

“The first fire in the Rocky Point Preserve ended up burning 1,800 acres and the second fire in Westhampton burned about 5,000 acres on the north and south of Sunrise Highway,” the Facebook post reads.