This intense competition took place over the weekend of May 12-13, 2018 and was a memorable one for The Knox School Crew Team. 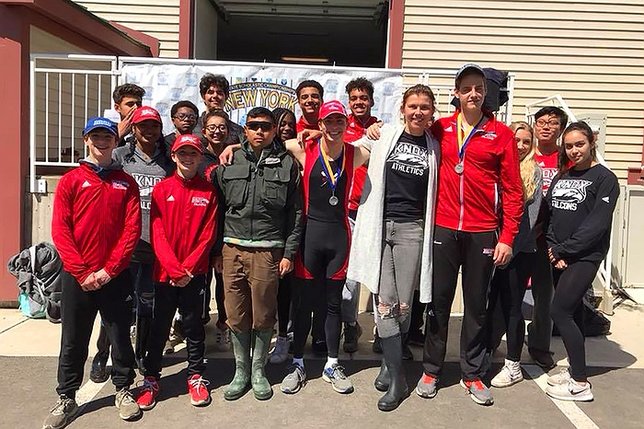 Photo by: The Knox School

Saratoga Springs, NY - May 16, 2018 - Each spring, over 70 New York State high schools come together to put their hard work all season to the test and compete for the state championship title at the New York State Scholastic Rowing Championship in Saratoga Springs, New York. This intense competition took place over the weekend of May 12-13, 2018 and was a memorable one for The Knox School Crew Team. As a result of their strongest season yet on the water, the team competed and placed in the top amongst some of the strongest crew programs in the state.
Three of the Knox boats advanced to the finals, and two rowers, Mateja Markovic and Tommy Barry, placed second in the Junior Doubles Race, which qualified them to move on to the National Competition on May 25-26, 2018 at Cooper River in Pennsauken, New Jersey. Markovic, from Serbia, and Barry from Miller Place, New York, made history for The Knox School as the first boat to achieve a silver medal at the New York State Championships.
The Girls Novice Four boat, comprised of Reese Palmer, Tess Pruzan, Demetria Lutz, Isabella Halpin, and Coxswain Amimarie Hughes also had a great first race, placing in the Petite Final. Boys Senior Double team of Hieu Bui and Daniel Leach also advanced to the Petite Final in their last crew race as Knox student athletes.
Novice Girls MeryemAydinli and Nikki Cannata did their best rowing all season in a Junior Varsity Double category, and the Boys Junior Four boat with Alexander Harris, KishanGuptar, Isai Bala, Christian Wiggins and Senior Coxswain Michael Curth also did well on the water. The Boys Novice Four boat, coxed by Declan Morrell-Smith and comprised of Liam Auleta, Arien Evans, Rami Salam and Nickaulas Molina also finished their first year rowing with a successful race.
The Knox School thanks these student athletes for their grit and determination to succeed in a sport that is grueling and physically demanding, and for representing the School with dignity and pride at the State Championships. GO FALCONS!
For additional information, please contact KarynCernera Bush, Director of Marketing and Communications for The Knox School at (631) 686-1675 ext. 425 or email kcbush@knoxschool.org.
About The Knox School
The Knox School is an independent boarding and day school whose mission is to provide the opportunity for capable students to excel within a liberal arts program infused with artistic and athletic pursuits, in preparation for higher education at selective colleges and universities. Our philosophy is to provide a diverse student body with a traditional, structured, and familial atmosphere that fosters academic, intellectual, and character development while celebrating individual strengths and talent. Rooted in the six core principles of integrity, kindness, courage, respect, responsibility, and scholarship, the Knox School aims to inspire in each student a love of learning and the desire to continually develop the skills necessary to lead happy, confident, and successful lives in a complex and changing world.