Long Island has some of the best shopping around. Loads of local shop options include high-brow and low-brow stores, along with food offerings should you need a drink or a bite along the way. Indoors ... 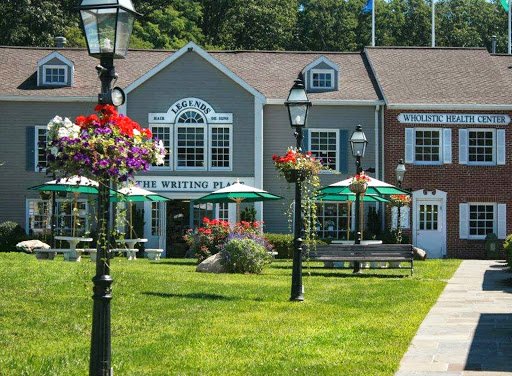 Styled to resemble an old-fashioned Main Street, Stony Brook Village Center actually dates from the 1940s, when it was conceived as a blend of Colonial Williamsburg's charm and New England's architecture. Under the guidance of philanthropist Ward Melville and architect Richard Haviland Smythe, the crescent-shaped commercial district evolved around the village green. It eventually became three distinct sections (Harbour Crescent, Inner Court, and Market Square), each boasting its own charm and share of restaurants and upscale boutiques.

With two locations on Long Island, Tanger is the perfect place for a day of outlet shopping and some great grub. If you're looking for the best value and the best brands, then head to Tanger Outlets. The shopping-mall chain features a variety of brand-name & designer outlet stores. Guess can also join TangerClub for exclusive members only savings offers and exciting Tanger perks all year long.

Stop by this farm stand off Mecox Road to purchase artisan cheeses from Mecox Bay Dairy, as well as fresh fruits and veggies.

Regarded as one of the Hamptons' most prestigious shopping districts (no small order, to be sure), Amagansett looks like a quintessential New England college town. A central public square is flanked on all sides by friendly little boutiques, and the village is home to a handful of superb restaurants, most of which require reservations. If you're lucky enough to land a table, don't be surprised to find yourself dining beside one of the many celebs who frequently visit Amagansett.

Oyster Bay first earned fame in the early 20th century, when President Theodore Roosevelt resided at his Sagamore Hill Estate. Other famous folks then found their way to what was known in the '20s as New York's Gold Coast, including insurance magnate W.R. Coe, Marshall Field III, Howard Gould, and Daniel Guggenheim. It's no surprise, then, that the Oyster Bay business area developed a reputation as a top shopping district. These days, dozens of high-end shops and upscale restaurants can be found in the pedestrian-friendly Main Street area.

The Village of Port Jefferson

Port Jeff, as locals call it, was named in honor of President Thomas Jefferson and is located just east of Stony Brook. The busy little town offers a wide range of shopping options, including terrific antique stores that specialize in everything from American Colonial items to standard knickknacks. The town also features a handful of good restaurants and picturesque Harborfront Park, which celebrates its heritage as a shipping center.

Home to prestigious retailers with names like Gucci, Prada, Tiffany and Co., Brooks Brothers, and Ralph Lauren, Americana Shopping Center is one of the area's premiere retail venues on this side of New York City. In total, more than 45 shops have branches here, all surrounded by ultra-modern architecture and immaculate landscaping. Truly, a shopping experience like no other.

This picturesque town, tucked away in the rolling hills of northeast Nassau County, may not be as well known as Oyster Bay and some of the other high-profile LI shopping districts, but it has certainly established a name for itself with antique shoppers. Although barely a square mile in size, Locust Valley boasts a myriad of antique shops that specialize in everything from fine 19th-century European to American Colonial goods. In addition, the town features an array of food options, including a few bakeshops and Forest Avenue's Chocolicious Chocolatier.

Not listed on many tourist guides, this sleepy little town is worth a stop, especially if you're in the mood for some antiquing (the Huntington Antiques Center is a must!). After the local whaling industry went under in the mid-19th century, Cold Spring Harbor fell on hard times until the 1880s brought a tourism boom. The research industry followed in later years, bringing with it the esteemed Cold Spring Harbor Laboratory. Aside from superb antique shops and bistros, the town offers family-friendly attractions like the Cold Spring Whaling Museum and the Fish Hatchery and Aquarium.

Boasting more than 240 name-brand stores, including Bloomingdale's, JCPenney, Macy's, and Nordstrom, this enclosed mall is a good place to shop, no matter the season. Wide, well-lit corridors, comfortable seating, and a slew of restaurant choices make it easy to spend an entire day here. If you feel the call of the silver screen, there's an eight-screen movie theater that shows all the top Hollywood productions.