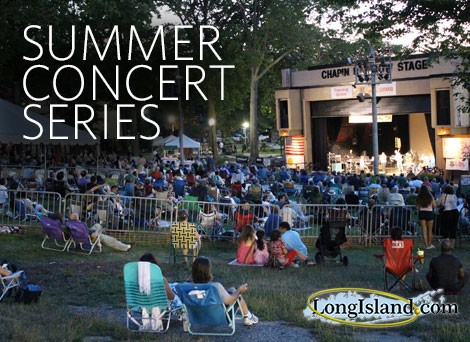 Summer Concerts are a great way to have an evening of fun with the whole family - for free!
Summertime on Long Island means you won’t have to search far and wide to find live musical performances. There are a handful of popular venues in Nassau and Suffolk that offer a summer concert series. All genres of popular music, on both indoor and outdoor stages, including age-appropriate performances make Long Island Summer Concert Series among the most relaxing and memorable seasonal activities. The best part is that many of these open-air performance performances are completely free to attend.  All you'll need is a blanket or a chair, a few snacks, and a some of Long Island's beautiful Summer weather.
These concerts are a great way to make any weeknight a mini stay-cation on Long Island.   From Strong's Marina to to the Port Jefferson Ferry to Main Street in Kings Park, there'll be a concert taking place nearly every day of the week. Performers are mostly local artists and cover a variety of genres.  Great tribute bands will play the songs you know and love in a casual and relaxing atmosphere.
These concert series come back every year thanks to popular demand.  Show your support for local artists and have an amazing Summer night out on Long Island.  You’ll definitely find a concert series taking place this Summer on Long Island to get excited about on our list below.
Montauk's Free Summer Concert Series - Coming Soon!
Montauk Village Green, Montauk
Presented by the Montauk Chamber of Commerce, the summer concert series is free to the public and will feature a variety of musicians including The Realm and The Dogwatchers. You can catch a show every Monday at the Montauk Village Green beginning at 6:30 PM in June/July and 6 PM in August.

Bay Shore Brown-Bag Lunchtime Concerts - Coming Soon!
Main Street, Bay Shore
The best excuse to take a long lunch on a Tuesday, this free concert series on Main Street in Bay Shore offers a little bit of everything from jazz to country. Concerts are held at 12:30 PM every Tuesday throughout July and August.
Northport Harbor Family Nights - Coming Soon!
Main Street, Northport
A portion of Main Street in Northport Village will be closed to accomodate two nights of live music and outdoor dining. In addition, local stores will be having sidewalk sales and there will be antique cars to enjoy.

Village of Cedarhurst's Under The Gazebo Series - Coming Soon!
Cedarhurst Park, Cedarhurst
With fantastic concerts being held every Tuesday through July and August, Cedarhurt is the place to be for a wide variety of musical acts this summer! Pre-shows begin at 7 PM and the main act will take the stage at 8 PM.

Port Jefferson's Sunset Concerts - Coming Soon!
Harborfront Park, Port Jefferson
With concerts at Jeanne Garant Harborfront Park every Wednesday at 6:30 p.m., guests are invited to enjoy free music on Long Island’s North Shore. Bring a picnic blanket and some snacks, and sit back, relax and enjoy the mid-week musical charms.  In the event of rain, concerts will be held on first floor of the Village Center. 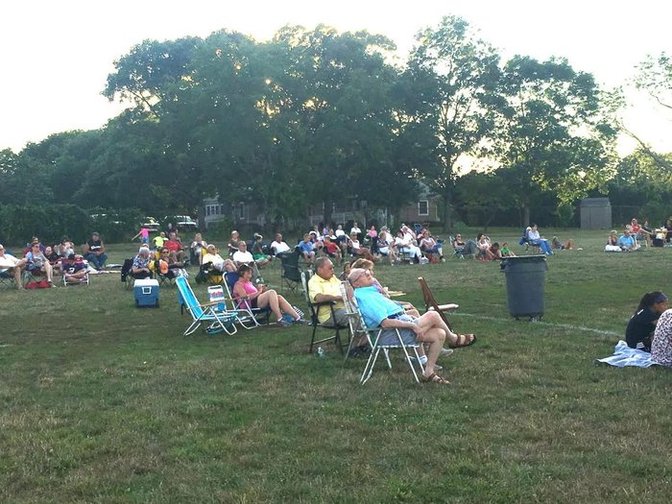 Summer Concerts at Chelsea Mansion - Coming Soon!
Chelsea Mansion, East Norwich
East Norwich's Chelsea Mansion will be the site of an exciting performance on July 31st. The Five Towns College Pops with Dean Karahalis will ensure that Long Islander certainly have a reason to visit the historic site.

Summertime In The Park Concert Series - Coming Soon!
Main Street, Bay Shore
Wednesday nights in Bay Shore will be filled with the sounds of the Bay Shore-Brightwaters Symphonic Band concerts throughout the course of this exciting summer series.

Northport's Summerfest Concerts - Coming Soon!
Village Park, Northport
The Robert W. Kruger Bandshell in Village Park will be the location of four exciting Summerfest concerts this August. Concerts are sponsored by the Northport Chamber of Commerce and will cover a variety of styles.

Valley Stream's Summer Concert Series - Coming Soon!
Village Hall, Valley Stream
The Village of Valley Stream will be celebrating the arrival of the summer season with a plethora of live performances at the Community Bandshell behind Village Hall. All shows are scheduled on Tuesdays and Thursdays at 8 PM.

Alive After Five - Coming Soon!
Main Street, Patchogue
Patchogue's Alive After Five concert series celebrates its 18th year this summer, and it's expected to be better than ever.  Seven stages with live music and entertainment, and dozens upon dozens of vendors of crafts, food and beer will bring Patchogue to life this summer on four Thursdays across June, July and August starting at 5 PM.

Community Band Concerts in Northport Village Park - Coming Soon!
Village Park, Northport
The Robert W. Krueger Bandshell at Northport's Village Park will be the site of weekly community band concerts during the summer! Enjoy the sounds of live music as you take in the beautiful harbor views of Northport.

Dennis Cannataro Family Summer Concert Series - Coming Soon!
Smithtown Library, Smithtown
Start your weekend early by checking out a cover band of some of your favorite bands of all time. This series features a tribute to some of the most popular bands in rock and roll, featuring music by BIlly Joel, The Beatles, and plenty of others.

Musical Moments in Kings Park - Coming Soon!
Russ Savatt Park, Main Street, Kings Park
Every Friday night, head down to Main Street in Kings Park to enjoy live outdoor music and local restaurant specials in celebration of the warm weather. The series features local artists and the music starts at 7:30 p.m. You'll have to bring your own seating, but the entertainment is guaranteed free of charge!

Glen Cove Friday Night Downtown Sounds - Coming Soon!
Village Square, Glen Cove
Summertime in Glen Cove means a weekly celebration at the Village Square! With musical acts in a variety of styles and genres, the concert series should appeal to music fans of all types! Be sure to arrive in Glen Cove early or stay after the show to experience the great local shops and restaurants!

Sound of Summer Concert Series - Coming Soon!
Strong's Water Club, Mattituck
Strong’s Water Club and Marina brings back its popular summer concert series to Long Island’s North Fork for its seventh consecutive year. Guests are invited to enjoy listening to the free concerts at the water’s edge on Saturdays from 4:00 PM to 8:00 PM.

Summer Concerts On The Village Green - Coming Soon!
The Green, Stony Brook
Every Sunday night from 7 PM to 9 PM you can stop by the Green in Stony Brook to hear a wide variety of live music, including Jazz, Swing, Big Band, Rock and Roll, Pop, and Motown, just to name a few!

Sundays at the Gazebo Summer Concert Series - Coming Soon!
Gazebo on Lake Avenue, St. James
Families are invited to gather on the St. James's beautiful Lake Avenue for a variety of entertaining live shows this summer. Whether you're looking to tap your foot to iconic Beatles songs, or line dance with SixGun, you're in for a great time!

Southampton's Concerts In The Park - Coming Soon!
Agawam Park and Cooper's Beach, Southampton
The Southampton Cultural Center will be sponsoring a summer concert series packed with 10 great shows this summer, including performances by Points East, Billboard Live, and plenty of others. Concerts are held on Wednesdays at 6:30 PM and various other days.

Summer Concerts in Memorial Park - Coming Soon!
Memorial Park, New Hyde Park
Bring your friends, a lawn chair, and a snack as you settle in for a night of family-friendly entertainment at Memorial Park! This year's schedule features The John Fogerty Project and a performance of Cinderella.

Good Ground Park's Summer Concerts - Coming Soon!
Good Ground Park, Hampton Bays
The Town of Southampton has announced a number of great concerts for the summertime at Good Ground Park! Shows begin at 7 PM and are free and open to the public.

Town of Babylon Summer Concerts - Coming Soon!
Tanner Park, Copiague
With some of the hottest original acts and tribute bands in the country, the Town of Babylon's Summer Concert Series is one of the hallmarks of the South Shore's entertainment slate!  Over a dozen conerts are scheduled across the span of less than two months, so grab your chair and prepare for a summer of unforgettable tunes!

City of Long Beach's Summer Concert Series - Coming Soon!
Various Beaches in Long Beach
Four concerts each week from July through August ensures that Long Beach residents will be tapping their feet to the music all summer long! Concerts are held at various locations throughout the City of Long Beach.

Don't see your favorite Summer Concert Series Listed?
Let Us Know, and We'll Make Sure It Gets Added to Our Guide!
Looking for more fun and free events this summer on Long Island?
Check out our Events Calendar for a ton of great ideas!