Filmmaker Astra Taylor Asks ‘What is Democracy?’ on Tom Needham’s The Sounds of Film

Astra Taylor, the director of ‘What is Democracy?’ is Tom Needham’s exclusive guest this Thursday on WUSB’s ‘Sounds of Film.’ 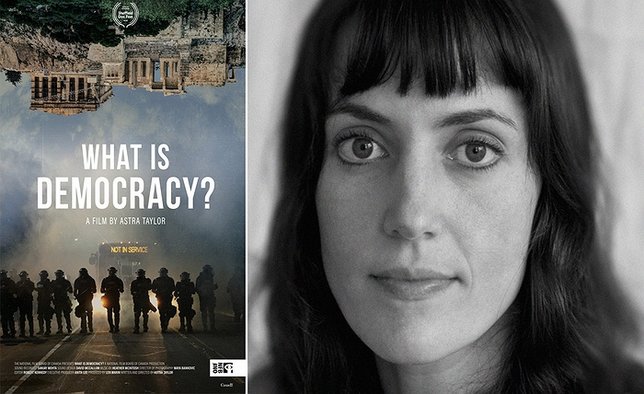 Astra Taylor, the director of ‘What is Democracy?’

Photo by: Courtesy of Zeitgeist Films

Stony Brook, NY - December 31, 2018 - ‘What is Democracy?’ director, Astra Taylor, will be Tom Needham’s first guest of the year this Thursday at 6 pm on WUSB’s ‘The Sounds of Film.’ She will be speaking on the show prior to her appearance at Huntington’s Cinema Arts Centre screening and reception sponsored by a Humanities New York Action Grant and the National Endowment of the Arts this Thursday, January 3rd at 7:30 pm.
‘What is Democracy?’ is a film which reflects on the word democracy. In the film, director Astra Taylor travels the world looking for answers.  She explores ancient Athens, medieval Italy and the United States where there is a growing gap between the rich and poor. The film features interviews with political theorists Silvia Federici and Cornel West.
Astra Taylor is an internationally recognized filmmaker, author, activist and musician. She is known for her philosophical documentaries ‘Zizek!’ and ‘Examined Life.’ She is also the author of ‘The People’s Platform: Taking Back Power and Culture in the Digital Age,’ ‘Examined Life: Excursions with Contemporary Thinkers,’ and the upcoming ‘Democracy May Not Exist But We’ll Miss It When It’s Gone.’
About The Sounds of Film
‘The Sounds of Film’ is the nation’s longest running film, music and ideas themed radio show. For the past 30 years, the program has delivered a popular mix of interviews and music to listeners all over Long Island, parts of Connecticut and streaming worldwide live on the internet. Past people interviewed for the show include director Antonino D’Ambrosio, Public Enemy’s Chuck D, writer Chris Hedges, Laurie Anderson, Dr. Jordan Peterson, composer/actor Paul Williams, philosopher Peter Singer, director Julie Cohen, director Simon Curtis, composer Antonio Sanchez, Mayor David Dinkens, and the Nation’s Katrina vanden Heuvel.