A unique and inspiring calendar theme was revealed, starring the timeless beauty and sage advice of 15 senior residents of the Gurwin Jewish ~ Fay J. Lindner Residences. 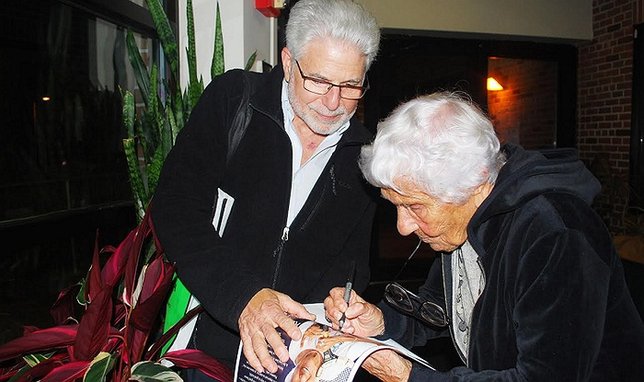 Commack, NY - December 28, 2016 - Adorable puppies, beautiful scenery and vintage cars — these are some of the common themes you’ll see for 2017 wall calendars. But recently at the Cinema Arts Centre in Huntington, a unique and inspiring calendar theme was revealed, starring the timeless beauty and sage advice of 15 senior residents of the Gurwin Jewish ~ Fay J. Lindner Residences. 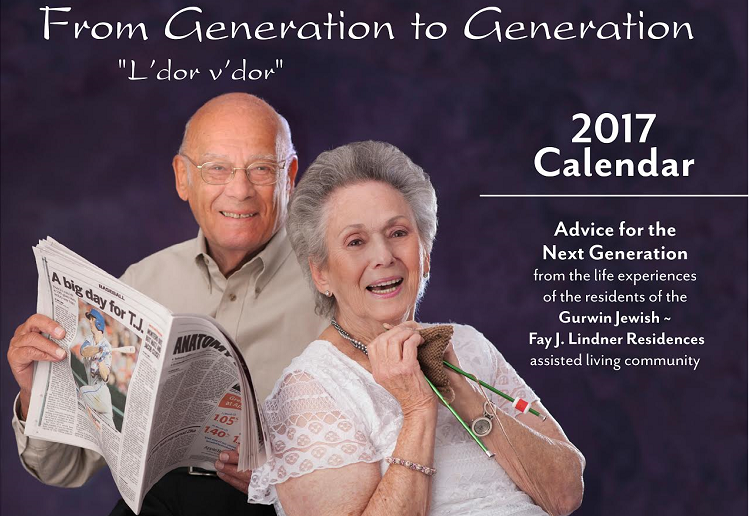 Pictured is the 2017 Calendar cover.

A calendar “reveal” was held in the Cinema Arts Centre’s Sky Lounge, filled to capacity with the calendar models, family members, staff and community members who were there to celebrate and catch a first glimpse of the anticipated publication. Now in its fifth year, the calendar not only includes stunning portraits of seniors who have cornered the market on successful aging, but it also celebrates the wisdom of the Greatest Generation.

“Tonight, we celebrate the men and women of our 2017 Calendar,” said Staci Rosenberg-Simons, Director of Marketing for the assisted living community and the emcee for the evening.

As each model was introduced, a dramatic image of the calendar page filled the screen, to smiles and an occasional tear. Following the introductions, a film entitled “Behind the Scenes: the Making of the 2017 Calendar” was shown, recounting the experience for the participants. The film can be viewed here.

“I was never a calendar girl before,” said Ruth deBeer, whose life changed dramatically when her family fled Germany to Palestine just before Kristallnacht. “I had so much fun, and the pictures turned out terrific. I am going to keep it on my wall forever!”

“The calendar is really such a wonderful project,” said Ms. Rosenberg-Simons. “Seeing their faces light up when they see their calendar pages for the first time is just priceless, but more than the photos, it is the advice they impart as a by-product of their life experiences that makes the calendar a treasure.”

With a title of “L’dor v’dor,” which translates to “From Generation to Generation,” the premise of the Gurwin Jewish ~ Fay J. Lindner Residences calendar is that its residents have led lives rich with experiences that will enable them to impart valuable advice for future generations. Among these are the wise words from Stewart Greene, an original “Mad Man” and former partner at the Wells Rich Greene advertising agency, known for many iconic ads, including Alka Seltzer’s “I Can’t Believe I Ate the Whole Thing!” Mr. Greene, who retired young and sailed around the world, says it’s important to “pursue your passions.” Mary Falcone, a quintessential Italian grandma with four daughters, 12 grandchildren and 14 great-grandchildren (and one on the way), advises future generations to always “cherish family.”

Family is, of course, at the heart of every “L’dor v’dor” calendar, and this year’s calendar features two couples who have cornered the market on long, happy marriages — Helen and Mel Morgenstein, currently married 72 years, and Les and Lorraine Parver, who got hitched 68 years ago. Each couple offers sage advice on a successful partnership, such as the Morgensteins’ reminder to always “respect each other,” and the Parvers’ suggestion to“cultivate your own interests.”

One of the most lasting benefits to come from Gurwin’s calendars is the recounting of world history, which this year comes in the form of three Holocaust survivors and a decorated World War II veteran. Gerald Burberry, who escaped Nazi Germany along with thousands of other Jewish children via the Kindertransport, is his family’s sole survivor. After marrying his wife Helen, Mr. Burberry discovered his love for nature photography, which lent well to his determination to find the beauty in life despite his experiences as a young man. He leaves future generations with this piece of advice: “Appreciate nature.”

Edwin Zola, who was drafted to fight in the Army around the same time his family was taken to Auschwitz, had the fortune of reuniting with his brother and sister, his only remaining family, who had moved to the United States before the war. Having seen first-hand the horrors of war, Mr. Zola says that people should “use common sense” as a means of ending war. And Ms. deBeer — better known as Ms. March — rebuilt her life in the United States, but wants to be sure that future generations “never forget.”

For Sidney Klein, a decorated World War II Army veteran who earned a Purple Heart after being injured in the Battle of the Bulge, it’s his pride in our nation that he credits as a driving force in his life. His advice: “Serve your country.”

“The residents featured in our calendar are truly an inspiration,” says Herbert H. Friedman, Executive Vice President, Gurwin Jewish. “They have lived lives filled with a wide range of rich experiences, and they offer us not only a window into the past, but a path to the future.”