NYRA announced its annual "Toys for Tots" weekend of giving is scheduled for Saturday, December 3 and Sunday, December 4 at Aqueduct Racetrack. 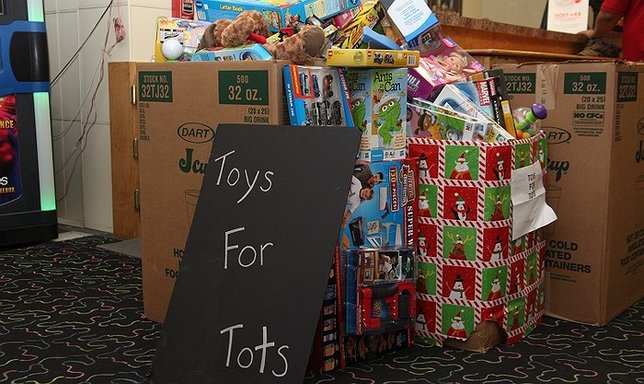 The Toys for Tots program collects and distributes new, unwrapped toys to local children in need each holiday season.

Ozone Park, NY - November 28, 2016 - The New York Racing Association (NYRA) announced its annual "Toys for Tots" weekend of giving is scheduled for Saturday, December 3 and Sunday, December 4 at Aqueduct Racetrack.  The weekend of giving is being offered in partnership with the Marine Corps Reserve "Toys for Tots" Foundation, with support from thoroughbred owner Harold Lerner and the New York Thoroughbred Horsemen's Association (NYTHA).

The Toys for Tots program collects and distributes new, unwrapped toys to local children in need each holiday season. Donation boxes will be located at Aqueduct's main clubhouse entrance, as well as at the Turf and Field entrance.

"The New York Racing Association is proud to support the Marine Corps' Toys for Tots Foundation during this season of giving," stated Lynn LaRocca, New York Racing Association Senior Vice President and Chief Experience Officer. "We encourage all horseplayers and fans to join us at Aqueduct on December 3 and 4, and to bring an unwrapped toy in support of this important community effort."

Two races on Saturday's Aqueduct card will be named for supporting organizations. This includes a race honoring the "Toys for Tots" Foundation and a race honoring the United States Marine Corps Reserve. Following the conclusion of each race, representatives from these participating organizations will join NYRA officials in the Aqueduct winner's circle for a special presentation.
"New York's horsemen are honored to be part of this holiday tradition," said NYTHA President Rick Violette Jr. "There is no better way to get into the spirit of the season than by helping the Marine Corps' 'Toys for Tots' Foundation deliver smiles to the children in our community."

"I really believe anything you can do for kids that unfortunately get left behind in the holiday season; it's a wonderful thing to put a smile on their face," said Lerner. "I've been committed to this program for a number of years after being initially introduced to it by my trainer Gary Contessa, who has been contributing part of his earnings to "Toys for Tots" on a Saturday in the past for years and thankful to a part of it again."

About the New York Racing Association
Founded in 1955, and franchised to run thoroughbred racing at New York's three major tracks (Aqueduct Racetrack, Belmont Park, and Saratoga Race Course) through 2033, The New York Racing Association, Inc. (NYRA) is considered the leading thoroughbred racing organization in North America and one of the most important racing entities in the global sport industry.


Host of the Belmont Stakes, the third leg of thoroughbred racing's "Triple Crown", the organization serves as the leader in the number of races, the amount of purse money and number of graded stakes in the United States.  In 2015, wagering on the New York Racing Association's 2,217 races at Aqueduct, Belmont and Saratoga accounted for more than 20 percent of all monies bet on thoroughbred racing within the United States.
About The Marine Toys for Tots Foundation
The Marine Toys for Tots Foundation is a not for profit organization authorized by the U.S. Marine Corps and the Department of Defense to provide fundraising and other necessary support for the annual Marine Corps Reserve Toys for Tots Program. Now in its 68th year, Toys for Tots provides joy and a message of hope to economically disadvantaged children through the gift of a new toy during the Christmas holiday season. Their gifts offer these children recognition and a positive memory they will cherish for a lifetime. Many of the gifts they provide, such as books, games and sports equipment, make a significant contribution to the educational, social and physical development of these children.
In 2015, Marines distributed gifts to nearly 7 million children in 740 communities nationwide. The Marine Toys for Tots Foundation relies on individual donations from the American public as well as support from corporate sponsors, including Duracell. For more information, visit www.toysfortots.org.