Half Hollow Hills Students Focused On Giving Back This Thanksgiving 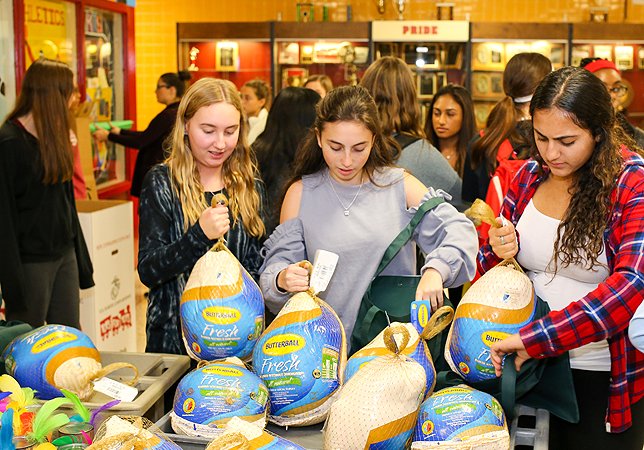 Students in the Half Hollow Hills Central School District have been collecting food to help local families.

Dix Hills, NY - November 22, 2017 - Groups of students in the Half Hollow Hills Central School District have been fundraising and collecting food to help local families who are food insecure enjoy a happy Thanksgiving. Food insecurity is when a family is never sure if they will have enough food to feed their family from week to week, and it continues to be a major problem on Long Island, especially during the holiday season.
According to Long Island Cares and the Hunger in America 2010 national study:
At Half Hollow Hills High School West, the Interact Club collaborated with the local Melville Rotary club to distribute 182 Thanksgiving packages to church groups and people in need. These special packages included a turkey for their Thanksgiving dinner, gift cards to Stew Leonard’s, and cans of food decorated by the Hills West Art Honor Society to look like turkeys. The students fundraised by selling coupon books during back-to-school night and parent-teacher conferences, and held pizza sales to fund the project.
Many student clubs at Half Hollow Hills High School East teamed up to collect 1,400 food items including corn bread mix, gravy, cake mix and boxes of stuffing, to be donated to the Gerald Ryan Outreach Center in Wyandanch. To help encourage more donations, the groups posted barometers around the building showing the daily amounts received and the amounts still needed to reach their goal.
Students at West Hollow Middle School also collected food for the Gerald Ryan Outreach Center, gathering an astounding 2,000 items including yams, cake mix and macaroni and cheese. Edward Marinich, guidance director at West Hollow said, “Even our mascot, Wolvie the Wolverine, got into the spirit of giving back and went around the building with signs motivating students to bring in the needed items.”
The Gerald J. Ryan Outreach Center is a not-for-profit organization serving Wyandanch and surrounding communities by providing food, clothing, education and employment opportunities to families, individuals and children who are struggling to break the cycle of poverty.
ABOUT HALF HOLLOW HILLS
An education-oriented community with high academic expectations, the Half Hollow Hills Central School District is located in a residential area of 50,000 people in the central part of Long Island, approximately 40 miles from New York City. Providing for the education of more than 8,000 students, the school district has five elementary schools, two middle schools and two high schools. Half Hollow Hills High Schools are fully accredited by the New York State Department of Education and the Middle States Association of Colleges and Schools. The District is committed to providing students opportunities to excel in academics, athletics, and the arts.