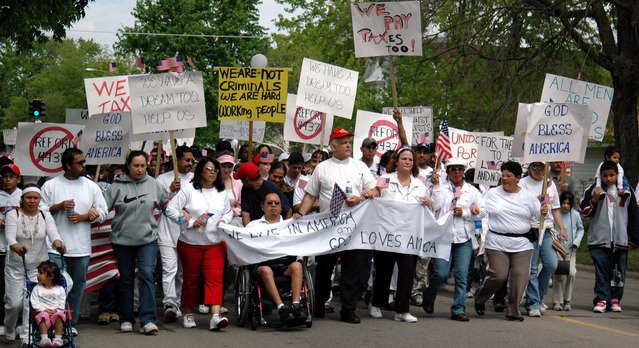 Immigrant groups have received an increased number of reported scams in recent weeks; with increased anxiety in immigrant communities due to political climate, immigrants should be aware of potential scammers offering immigration services.

New York, NY - November 22, 2016 - In light of increased fear and anxiety in immigrant communities as a result of the current political climate, Attorney General Eric T. Schneiderman today issued a fraud alert warning immigrants to be aware of potential scammers offering immigration services. Immigration fraud affects large segments of communities and involves individuals or companies who target vulnerable immigrants by providing unauthorized and fraudulent immigration services. In recent weeks, the Attorney General’s office and many legal aid organizations that work with immigrant communities have received an increased number of calls and reported scams.

“In the past two weeks, we’ve seen intense fear and anxiety in immigrant communities. New York has zero tolerance for anyone who would prey on that fear to defraud immigrants and their families,” Attorney General Schneiderman said. “We will use all the tools at our disposal to bring to justice those who commit fraud against our immigrant communities.”

One of the most common scams right now is unsolicited calls from fake immigration officials. For example, one immigrant living in New York recently received a call that is the same as an official government immigration agency. The fraudster told him he was in the country illegally and must immediately pay $1,550. Federal authorities will never demand immediate payment, request personal sensitive information, or threaten you over the phone. If you receive a call like this, hang up immediately and report the possible fraud to our office.

Attorney General Schneiderman also highlighted key resources for New York’s immigrant communities to seek immigration and naturalization-related support.  Managed by Catholic Charities Community Services, the New Americans hotline is a toll-free, multi-lingual hotline that provides live assistance in receiving immigration and naturalization information and referrals, regardless of citizenship or documented status. All calls to the hotline are confidential and anonymous. Call 1-800-566-7636 (toll-free) anytime between 9:00am to 8:00pm Monday through Friday.

Unsolicited Calls From Fake Officials: One of the most common immigration services scams are unsolicited calls from someone claiming to be a government official or law enforcement officer that make threats such as deportation. Often times the number on caller ID may look like a legitimate government number. The United States Citizenship and Immigration Services (USCIS) and the Immigration and Customs Enforcement (ICE) will never request payment over the phone, so immigrants should be wary of scammers that ask for any sensitive or personal information, demand payment and threaten deportation if you do not comply.

Notario Fraud: In many Latin American countries a “notario” refers to someone who has the authority to render legal services. Unscrupulous “notaries” who are not attorneys often rely on this misunderstanding to exploit immigrants. They charge immigrants excessive application fees without ever submitting applications to the immigration authorities or may induce deportation by submitting applications for relief for which the immigrant is not eligible for or did not request.

Misrepresenting Legal Credentials: Individuals may falsely claim to be attorneys or wrongly suggest that they are able to appear before the immigration agencies or court. They take advantage of immigrants who will unknowingly pay exorbitant fees for their services. By misrepresenting their qualifications, these individuals can have a detrimental impact on the immigrants with whom they work. For example, immigrants who take advice from and work with these individuals may waive their right to obtain legal residency, be unnecessarily deported, or become subject to civil and/or criminal liability for the filing of false claims.

Fraudulent Promises to Expedite Process: This type of fraud concerns individuals who contend that they know employees at immigration offices who can expedite the processing of their clients applications. Accordingly, they request high fees for this special service, but fail to provide it.

Misinformation Fraud: Under this type of fraud, a provider will typically provide inaccurate or false information to the immigrant concerning his or her eligibility for an adjustment of status under a particular law. In these cases, the immigrant is usually not aware that they have been a victim of fraud until they receive a letter of ineligibility from immigration authorities. The provider knows the immigrant is not entitled to relief, or ineligible, but will file the application with immigration authorities regardless.

Immigration Affinity Fraud: Some providers target immigrants belonging to their same ethnic or racial group. Accordingly, they seek to gain advantage over other providers by claiming to identify with the ethnic, racial, national origin or community-based affiliations of the immigrant group.

Unauthorized Practice of the Law: Individuals may not be licensed to practice law but present themselves as attorneys or immigration law experts capable of providing legal advice and services.

Additional resources can be found on the Attorney General’s website, including Know Your Rights: Immigration Services Fraud and Don’t Be a Victim of Immigration Fraud brochure. All authorized attorneys will be registered with the New York State Court. To verify an attorney, see here.

“New York City is committed to protecting immigrant New Yorkers from fraudulent and unscrupulous immigration services providers.  At a time when the uncertainty following the election can create fertile ground for fraudulent providers and fear among immigrant communities, we thank Attorney General Schneiderman for his vigilance.  I look forward to continuing our collaboration with his office, the NYC Department of Consumer Affairs, and our community partners to raise awareness about immigration services fraud and connect New Yorkers to safe, free immigration legal services,” said Commissioner Nisha Agarwal, Mayor's Office of Immigrant Affairs.

"DCA is deeply committed to working with partners to educate communities about how to avoid predatory immigration service providers and to identifying targets for enforcement,” said Department of Consumer Affairs (DCA) Commissioner Lorelei Salas. “I urge anyone who has paid their hard earned money to an immigration service provider or notario público to provide advice on or prepare immigration documents, to file a complaint—either anonymously or knowing their information is safe with the City—to file a complaint with us by calling 311.”

“Now more than ever it is critical that our fellow New Yorkers are kept safe from those who seek to take advantage of them,” said Steve Choi, Executive Director of the New York Immigration Coalition. “In a time when immigrant communities are terrified of what's to come, unscrupulous individuals may take advantage of immigrants fears by promising relief, permanent residency, or citizenship that they cannot actually provide. We must do everything in our power to ensure that immigrant communities are safe from this kind of harm. We stand with the Attorney General and commend him on his vigilance on behalf of our community members.”

“Over the past two weeks, the fear, anxiety, and uncertainty among immigrant communities has both deepened and intensified in a way that has not been seen for more than a generation,” said Mario Russell, Director, Immigrant and Refugee Services, Catholic Charities NY. “Today, Catholic Charities stands with the families, children, and workers who have come to America to build their dreams and build their communities; we stand with the Attorney General of New York in his important work to protect and safeguard the rights of its newcomers; and we stand for creating a just and compassionate society by affirming the dignity of each person. Catholic Charities' work to combat fraud against immigrants through its New York State New Americans Hotline (1-800-566-7637) is as essential to its mission as is its commitment to providing high competent legal services to thousands of immigrants each year. We are confident that in joining our work with the efforts, vigilance, and support of Attorney General Eric Schneiderman, immigrants will find some of the support and protection they need.”

“For immigrants, these are very uncertain times. During times of uncertainty, fraudsters prey on the fears of the most vulnerable, peddling hope and false promises,” said Angela Fernandez, Esq, Executive Director of Northern Manhattan Coalition for Immigrant Rights. “We applaud Attorney General Schneiderman’s resoluteness in using all of the tools at his disposal to protect immigrants from scams and fraud that have the ability of destroying lives.”

“In this time of increased fear and confusion for members of immigrant communities, it is more important than ever to prevent vulnerable people from being taken advantage of,” said Eva Hassett, Executive Director, International Institute of Buffalo. “We are grateful for the Attorney General’s efforts to work against fraud; immigrant and legal services agencies in Western New York will do our part to support his effort.”

“Empire Justice Center commends Attorney General Schneiderman for alerting New York’s immigrant communities to potential immigration related scams,” said Bryan D. Hetherington, Chief Counsel, Empire Justice Center. “They are rightfully fearful because of the anti-immigrant rhetoric of administration in Washington and unfortunately unscrupulous people are taking advantage of that fear.  Here in New York, immigrant communities are at the heart of our state and we recognize the many contributions they make. We appreciate that Attorney General Schneiderman has recognized the importance of creating resources to protect New York immigrants from scammers and is taking decisive action.”

“All New Yorkers deserve protection from those who would take advantage of their unfamiliarity with a new city, a new language, and a complex legal system,” said Manhattan District Attorney Cyrus R. Vance, Jr. “And no New Yorker – regardless of national origin or immigration status – should ever be afraid to report a crime. I thank Attorney General Schneiderman for his collaboration and commitment to defending our immigrant communities from scams and fraud.”

Acting Brooklyn District Attorney Eric Gonzalez said, “My Office’s Immigrant Fraud Unit is working diligently to prosecute scams that target the immigrant community and, earlier this year, secured a conviction against a fake lawyer who exploited immigrants by offering fraudulent services – the first conviction in New York State under the Immigrant Assistance Services Fraud Statute that was enacted in 2015. We also regularly conduct informational seminars and Immigration Forums to educate and raise awareness among immigrants about scams and other exploitative practices, and to offer assistance. I applaud Attorney General Schneiderman for his vigilance in this important area and join him in warning against unwarranted solicitations by those who seek to prey on this vulnerable population.”

Queens District Attorney Richard A. Brown said, “Queens County is the most ethnically and culturally diverse areas in the United States with more than 2.3 million residents. With over 120 countries represented in our neighborhoods and over 160 languages spoken in our County, we take crimes committed against members of our immigrant communities seriously. Our Office of Immigrant Affairs (OIA), along with several other bureaus, investigates and prosecutes crimes that target immigrants. In addition, our OIA Office conducts extensive outreach initiatives in order to keep our communities informed on identifying and protecting against common immigration scams. Our Office is pleased to work with New York State Attorney General Eric Schneiderman and our other law enforcement colleagues in aggressively prosecuting immigration fraud cases.”

Bronx District Attorney Darcel D. Clark said, “The Bronx is home to more than 300,000 immigrants, and we are here to protect them from those who use language barriers or citizenship status to exploit their fears and defraud them in the areas of employment, housing and immigration documentation services. We will vigorously prosecute anyone who preys on immigrants, and we encourage all victims—no matter their status—to seek help from our Immigrant Affairs Unit.”