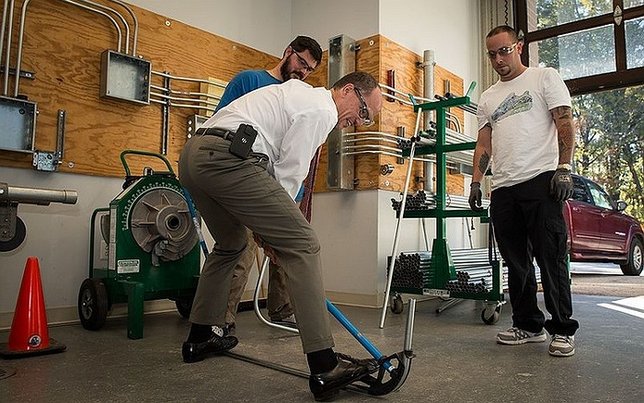 Hundreds of local events taking place across the country to highlight the value of apprenticeships and raise awareness about apprenticeship opportunities in diverse industries.

Photo by: US Department of Labor, licensed under CC-BY A 2.0 Generic.

A companion resolution was introduced today in the Senate by Sen. Patty Murray (D-WA). Rep. Rice introduced a similar resolution last year as the U.S. Department of Labor (DOL) and the Obama administration celebrated the first-ever National Apprenticeship Week with more than 200 local events around the country highlighting the potential for apprenticeship programs to put more American workers on a path to new skills, higher wages, and greater opportunities to advance their careers. This year, there were more than 500 events planned across the country to celebrate the second National Apprenticeship Week.

“National Apprenticeship Week is an excellent opportunity to raise awareness about apprenticeship programs in communities across the country that are putting more and more American workers on a path to new skills, higher wages and better careers,” said Representative Kathleen Rice. “When workers get the chance to earn while they learn, it’ a win-win for workers, employers and the American economy. I’m grateful for all that President Obama and Secretary Perez have done to expand apprenticeship opportunities across the U.S., and I’ll continue doing everything I can to keep building on that progress in the years ahead.”

“We know that for every dollar spent on apprenticeships, employers get an average of $1.47 back in increased productivity,” stated Bobby Scott (D-VA), Ranking Member of the Committee on Education and the Workforce. “As we celebrate National Apprenticeship Week, I remain committed to working with my colleagues to make more resources available to businesses, unions and other organizations that want to start and continue registered apprenticeship programs. And, as we work toward this goal, it will also be critical that young people and families all across the United States know about the skills, job stability and income that apprenticeship programs can provide. Apprenticeships are one of the best ways to close the skills gap and one of the clearest pathways to a good job.”

“I am proud to introduce this resolution that recognizes the importance of strengthening and expanding registered apprenticeship programs,” said Senator Patty Murray. “Apprenticeships help make sure students and workers are prepared to compete for high-skill, high-wage jobs, which is critical to providing more families in my home state of Washington and across the country a ladder of opportunity to reach a stable middle class life.”

“Apprenticeships are experiencing a modern renaissance in America, because the earn-while-learn model is a win-win proposition for workers looking to punch their ticket to the middle class and for employers looking to grow and thrive in our modern global economy,” said U.S. Secretary of Labor Thomas Perez.

Rep. Rice also recently announced that New York has received a $1.5 million federal grant to expand apprenticeship opportunities throughout the state. The grant was awarded through DOL’s ApprenticeshipUSA initiative, a $50.5 million investment that will create thousands of new apprenticeship opportunities in diverse industries over the next 18 months. DOL reports that 91% of apprentices are employed after completing their programs, with an average annual starting wage above $60,000. The U.S. has added new 125,000 apprenticeships since 2014, the largest increase in nearly a decade, and last year, the President signed into law the first-ever annual funding for apprenticeship programs in the Fiscal Year 2016 spending bill.

More information about the initiative is available here.